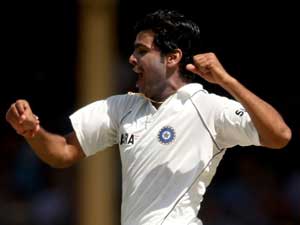 In a bid to return to Team India, RP Singh on Monday registered his first five-wicket haul of the Ranji Trophy season in their match against Bengal but the Uttar Pradesh pacer said he is not looking too far ahead.

"The selection issue is secondary at the moment. It's not in my hands. I'm just focusing about taking UP into the next stage," the left-arm pacer, who bagged 5/77 to bundle out Bengal for 284, said.

"I've been bowling well this season but it's good to get my first five-for. I just look forward to carry on with the momentum."

RP pulled his left hamstring in the run-up to the third ball of his third over of the day as he pulled himself out of the field.

"It's muscle pull that will take three-four days to heal. I just did not want to aggravate so pulled myself back."

Piyush Chawla after being hit by Laxmi Ratan Shukla on Sunday had a bruised left shoulder but RP said the UP skipper would be fit for the next match.

RP's effort went in vain as their batsmen put up a meek show to be bundled out for 140 in their second essay to hand Bengal an eight-wicket victory with more than a day to spare.

The UP pacer, however, said the loss would not hurt much as they still are in joint lead in group B with Railways on 20 points each.

"We have had two wins including one with a bonus point. We have two more matches to go and both are at home. We are still comfortable to go all the way," RP said.

He further said it's a welcome sign that Ranji matches were turning out to be result oriented these days.

"Six-seven years ago, we used to see only draws with first innings lead but these days with green tops and lively wickets we get to see results within four days.

"One team has at least two wins every year which is a positive sign for the Indian cricket," RP said.

Comments
Topics mentioned in this article
Cricket UP BEN RP Singh Piyush Chawla
Get the latest updates on IPL 2020, check out the IPL Schedule for 2020 and Indian Premier League (IPL) Cricket live score . Like us on Facebook or follow us on Twitter for more sports updates. You can also download the NDTV Cricket app for Android or iOS.