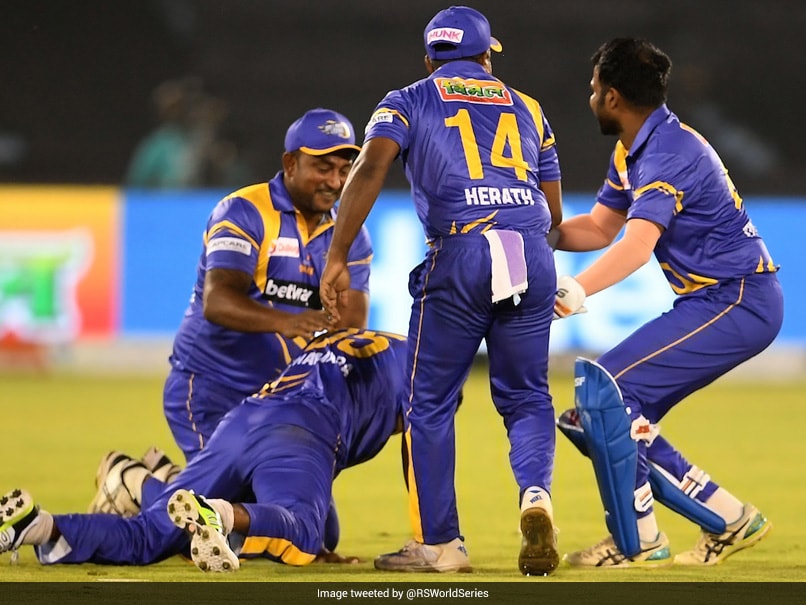 Sri Lanka Legends will meet India Legends in the summit clash of the Road Safety World Series T20 at the Shaheed Veer Narayan Singh International Cricket Stadium on Sunday. And, it was only after Tillakaratne Dilshan's outfit easily got the better of Jonty Rhodes' South Africa Legends by eight wickets on Friday night. Sri Lankans were always a favourite on paper and they delivered up to their potential and form as they romped home to a comfortable win, chasing down a 126-run target with 16 balls to spare.

Riding on No. 4 batsman Chinthaka Jayasinghe's (47*) and south-paw Upul Tharanga's (39*) partnership of 70 runs for the third wicket, Sri Lanka finished at 129 for the loss of two wickets in 17.2 overs.

Captain and in-form Dilshan scored 18 and Sanath Jayasuriya, too, got as many runs.

The move clicked as the Lankans folded out South Africans for a low score of 125 in 20 overs.

Seamer Nuwan Kulasekara was the wrecker-in-chief for the Sri Lankans with five wickets for 25 runs.

For South Africans, it was opener Morne van Wyk who starred with a half-century from 57 balls including eight boundaries.

South Africa began on a positive note with Van Wyk giving a solid start, but the Lankans immediately put the brake on African surge as Kulasekara got his in-form partner Andrew Puttick for a duck.

In need of a big partnership, the South Africans got one in Van Wyk and Alviro Petersen. The duo was not aggressive but did not shy away from getting that odd boundary or rotate strike before Farveez Maharoof got the scalp of Petersen as the scoreboard read 65/2.

Later, Van Wyk got his maiden half-century of the tournament before Sri Lankan legend Sanath Jayasuriya got him trapped in front of the wickets for 53.

Once the opener went home, it was all formality for Sri Lanka. Other than Van Wyk and Petersen, only Justin Kemp could get into the double-digit score as the rest of the South African batsman fell for single digits.

South Africa lost its seven wickets for 29 runs, all thanks to Kulasekara's super spell.