Reactions flow in after Laxman's retirement

Indian cricketers have recalled their moments with the Very Very Special batsman in their special way. Here are some of them. 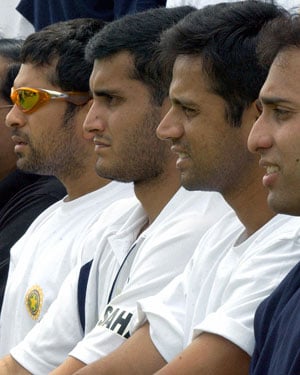 Indian cricketers have recalled their moments with the Very Very Special batsman in their special way. Here are some of them.

Seniormost batsman Sachin Tendulkar feels that VVS Laxman's void in the Indian team will be difficult to fulfill and he will miss the Hyderabadi stylist who announced his retirement with immediate effect.

"When I walk out to play in Hyderabad, I will feel a deep void. A void that can never be fulfilled. My dear friend, VVS Laxman..." Tendulkar tweeted today.

Former India captain Dilip Vengsarkar said that Laxman is a cricketer who emerges once in a generation.

"Laxman has had an outstanding career. He is one of the few batsman who was a great chaser, an art only a few could master," Vengsarkar stated.

Sourav Ganguly, who has shared the Indian dressing room with Laxman for more than decade recollected the epic knock of 281 at the Eden Gardens.

"That was the brightest day in Laxman's career. That innings had a big impact on Indian cricket. It had given us a huge sense of relief and made us have belief in ourself that we're not behind... Since then, we never looked back as Indian cricket kept improving."

"He was terrific... a God's gifted player. When I first saw him, his style seemed to me like that of Mohammad Azharuddin but he went on to prove himself to be better."

Ganguly further said Laxman was very different in the dressing room, much unlike what he seemed while being on the field. Â

Recalling India's 2007 Test vs South Africa in Cape Town, Ganguly said they had to change the batting order and he had to come at 4 as Laxman was taking shower.

"We had lost two quick wickets and the umpire did not allow Tendulkar to bat at his usual position as a penalty for being out of the field for about 15 minutes.

"It was Laxman's turn next but we all kept searching for him frantically. The match had to be stopped as I was rushed in. I remember the physio tying my shoelace, while Tendulkar was busy putting on the pad on one leg, while I was doing another. I was in track suits," he remembered fondly.

"Later we realised that he was taking shower. I can guarantee that in 125 of his 134 matches he went to shower just before the batsman ahead of him went in (to bat)."

"I once did not have my iPod and borrowed his, but all the songs that I shuffled were only devotional songs which I did not understand. I soon gave it back to him,"

Yuvraj Singh wanted VVS to play till the end of 2012.

"honoured to get the arjuna award! But. Really sad vvs has retired! I was hoping he would play end of the year ! Nicest human being ever"\

The out-of-form Rohit Sharma tweeted in his own way.

"The man who bailed out team INDIA from many difficult situations and displayed some unbelievable batting throughout his career......has just retired today u will be missed by all on the field..good wishes to u and family lachi bhai..cheers and thanks for the memories!"

S Sreesanth, who is nursing an injury thanked Laxman.

"Will always cherish those lovely moments with u brother.. Ur one of the top most true gentleman cricketers ever..u will surely be missd..Had very few battng partnerships in test matchs nd most of thm wr with u.U hve really helped me nd will always be grateful to u nd ur family"

Comments
Topics mentioned in this article
Cricket Sreesanth VVS Laxman Sachin Ramesh Tendulkar Sourav Ganguly Anil Kumble Gary Kirsten Yuvraj Singh RG Sharma Dilip Balwant Vengsarkar
Get the latest updates on ICC T20 Worldcup 2022 and CWG 2022 check out the Schedule, Live Score and Medals Tally. Like us on Facebook or follow us on Twitter for more sports updates. You can also download the NDTV Cricket app for Android or iOS.