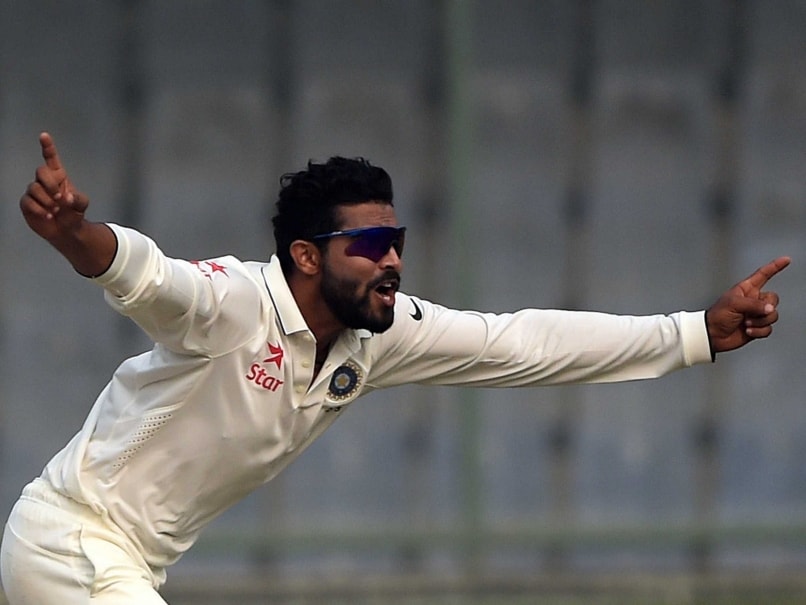 Ravindra Jadeja notched up his fifth 10-wicket haul in a first-class match as India Blue won by 355 runs.© AFP

Ravindra Jadeja spiced up an otherwise uneventful final day with another lethal spell of left-arm spin as India Blue notched up a crushing 355-run win over Reds to clinch the inaugural day/night Duleep Trophy tournament on Wednesday.

With the match already in Blue team's pocket after a gigantic 337-run first innings lead, the fifth day was only of academic interest but Jadeja (5/76 in 18.1 overs) bundled out Reds, set an improbable victory target of 517 runs, for 161 in 44.1 overs.Â

Jadeja's match haul of 10/171 is his sixth 10-for in first-class cricket and will enhance his confidence as India get ready to take on New Zealand in a week's time.

It was again the pace, approximately around 90 kmph, which made the difference as most of the deliveries straightened after pitching, with the odd ball turning away and a few coming in with the angle.

The batsmen could neither fully commit forward and those going for the cross-batted sweep shot paid the price because of his wicket to wicket line.

India Blue captain Gautam Gambhir, on Wednesday, batted for 10 overs as his team added another 40 runs before declaring the second innings at 179 for five with a lead of 516 runs. Rohit Sharma (32 no) got 75 balls as part of his match practice before the Test series.

With victory out of question, one thought that it would be a case of playing out the required overs before the captains decide to call off the match.

After Abhinav Mukund was hit on the forearm by a Pankaj Singh snorter and subsequently retired, Shikhar Dhawan (29) and Sudeep Chatterjee (13) added 36 runs before Jadeja struck the first blow.

Chatterjee tried to sweep one from the rough and the miscued catch was easily taken by Abhimanyu Mithun at mid-off.

In the very next over, Dhawan was done in by a Parveez Rasool (1/31) delivery that drifted and turned away with Gambhir taking a sharp low catch at first slip.

Yuvraj Singh (21) and Gurkeerat Singh Mann (39 off 37 balls) added 52 runs in quick time before the veteran superstar lost his concentration while going for a slog sweep against Jadeja only to find Pankaj at deep square leg boundary.

Yuvraj had a terrible tournament as he scored only 52 runs in four completed innings with an average of 13. An India comeback seems a distant reality as the two-time World Cup winner looked a pale shadow of his old self.

Reds went downhill from there on as Binny also tried to sweep and missed the line to make it 98 for four (effectively five with Mukund not coming out to bat).

In the meantime, Karn Sharma (3/33 in 9 overs) increased the pressure as he got Gurkeerat stumped by Dinesh Karthik with a lovely leg-break and Jadeja removed Amit Mishra to make it four wickets for himself.

Karn then found the outside edge of Ankush Bains (20) and was lucky to dismiss Pradeep Sangwan with a half-tracker.

Jadeja completed a coveted five-for when he bowled one that had Nathu Singh plumb in-front.

Comments
Topics mentioned in this article
Ravindra Jadeja Yuvraj Singh Gautam Gambhir Cheteshwar Pujara Rohit Sharma Shikhar Dhawan Pankaj Singh Cricket
Get the latest updates on IPL Auction 2023 and check out  IPL 2023 and Live Cricket Score. Like us on Facebook or follow us on Twitter for more sports updates. You can also download the NDTV Cricket app for Android or iOS.