A weakened batting line-up in the absence of their regular skipper Hrishikesh Kanitkar, Rajasthan's experienced duo of Parida and Bist showed a lot of determination while batting to put their team in the drivers' seat. 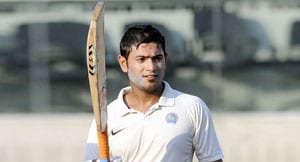 Rashmi Ranjan Parida struck a watchful century while Robin Bist played a useful knock of 85 as Rajasthan took the vital first innings lead against Madhya Pradesh to finish the second day on 306 for six in their Ranji Trophy Group A match on Sunday. (File Photo of Robin Bist)

At stumps, Rajasthan were 50 runs ahead of Madhya Pradesh's first innings total of 256 all out with Dishant Yagnik (21) and Madhur Khatri (2) at the crease.

A weakened batting line-up in the absence of their regular skipper Hrishikesh Kanitkar, Rajasthan's experienced duo of Parida and Bist showed a lot of determination while batting to put their team in the drivers' seat.

Skipper Vineet Saxena (32) and Puneet Yadav (32) also made useful contributions for the hosts at the K L Saini Ground.

Resuming at their overnight score of 7 for one, Saxena and Bist combined well to stitch together 76-run partnership for the second wicket before the former was snapped up by pacer Ishwar Pandey.

Ashok Menaria (4) did not last long as he became Pandey's third victim after the right-arm pacer had accounted for Ankit Lamba (5) yesterday.

At 87 for 3, Bist found an ably ally in Parida and revived the sagging fortunes of Rajasthan with their 85-run stand for the fourth wicket.

Bist fell just 15 runs short of what would have been a well-deserved century as he was caught by Naman Ojha behind stumps off Anand Rajan. Bist's 176-ball innings was laced with 11 fours.

Next man in, Puneet Yadav supported Parida well with his 29-ball 32-run cameo to take the team past 200-run mark. He had six hits to the fence.

Wicket-keeper batsman Dishant Yagnik then added 82 runs for the sixth wicket with Parida before the latter fell in the penultimate over of the day to Pandey after completing his well-deserved hundred.

For Madhya Pradesh, Pandey was the pick of the bowlers with 4 for 65 while Rajan and Jalaj Saxena chipped in with a wicket apiece.