The experienced Wasim Jaffer made 61 while Asitya Tare scored 53 at the Bandra Kurla Complex. 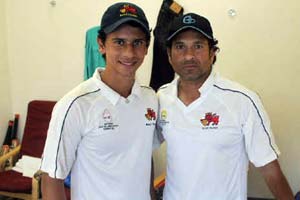 Promising Mumbai batsman Siddhesh Lad impressed with a knock of 74 before Delhi fought back with a couple of late wickets to keep the hosts to 252 for six on the first day of their Group A Ranji Trophy match here on Thursday.

The experienced Wasim Jaffer made 61 while Asitya Tare scored 53 at the Bandra Kurla Complex.

For the visitors, Ashish Nehra and Parvinder Awana were the two most impressive bowlers, picking up two wickets each after Mumbai opted to bat.

At stumps, Hiken Shah and Balwinder Sacdhu were batting on 13 and seven, respectively.

Mumbai were off to a bad start as they lost opener Kaustabh Pawar with just 10 runs on the board, veteran left-arm pacer Nehra being the successful bowler.

A 94-run partnership for the second wicket ensued between wicketkeeper-batsman Tare and Jaffer before the latter was sent back by Awana with the scoreboard reading 104/2 in the 39th over.

Jaffer's innings was laced 12 fours and a six and he faced 95 balls.

Tare got out to Manan Sharma after spending a good 279 minutes in the middle, during which he found the fence six times.

21-year-old Lal continued to tackle the Delhhi bowlers and by the time he beacame the sixth man to get out, Lad had struck nine fours having faced 137 balls and spent 194 minutes at the crease.

All-rounder Abhishek Yadav (12) could not do much while the talented Suryakumar Yaday (20) got out after getting a start.

Comments
Topics mentioned in this article
Cricket DEL Mumbai Indians Siddhesh Lad Wasim Jaffer Irfan Pathan Vikram Solanki Virat Kohli Paul Valthaty Virender Sehwag
Get the latest updates on IND vs NZ 2021, check out the Schedule and Live Score . Like us on Facebook or follow us on Twitter for more sports updates. You can also download the NDTV Cricket app for Android or iOS.