Siddesh, who has one century under his belt in List A matches, came in when Mumbai were in dire straits with 99 for five and Karnataka's 251 all out looking an uphill task for Mumbai to get past. 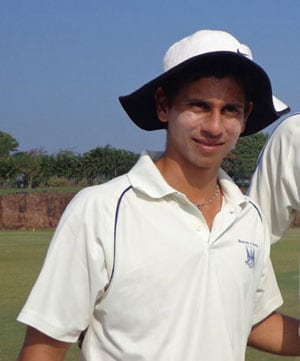 Siddesh Lad and tail-ender Javed Khan kept Mumbai in hunt for a first innings lead with their fighting knocks as they ended the second day at 217 for seven, trailing by just 34 runs against Karnataka in Group A Ranji Trophy match, in Bangalore on Monday. Karnataka pacer HS Sharath and leg-spinner Shreyas Gopal took three wickets each as they cleaned up the top order, before Lad got going and brought Mumbai back into reckoning.

At stumps, Lad and Khan were batting on 59 and 33 runs, respectively. Lad cracked seven boundaries and a six, while Khan smashed four boundaries and a six as well. Both have added a crucial 56-run stand for eighth wicket, which gave a glimmer of hope for Mumbai to get first innings lead against table-toppers Karnataka.

Siddesh, who has one century under his belt in List A matches, came in when Mumbai were in dire straits with 99 for five and Karnataka's 251 all out looking an uphill task for Mumbai to get past.

However, the 21-year-old right-hand batsman built invaluable partnerships of 30 and 32 with Doraiswamy Subramanian (15) and Shardul Thakur (18) for sixth and seventh wicket, respectively. When Thakur departed Mumbai were 161 for seven, 91 runs behind hosts, Lad and Khan dropped anchor and brought Mumbai in sight of getting a lead.

At the start, it seemed like a nightmare unfolding for Mumbai with opener Aditya Tare becoming Sharath's first victim. What followed was a procession of sorts as the top half of the Mumbai line-up made quick return to the dressing room. Big gun Wasim Jaffer (0), last-match centurion Hiken Shah (44), Kaustubh Pawar (15) and Suryakumar Yadav (7), made brief appearances. Resuming their first innings at 228 for seven on Day 2, Karnataka's innings folded after adding 23 runs. Right-arm pacer Shardul Thakur picked up two wickets in the morning after he sent back Mithun (9) and KP Apanna (7), ending with first innings figures of four for 65 in 22.3 overs. The last man to get out for Karnataka was centurion Lokesh Rahul when he was run-out after adding 13 runs to his overnight unbeaten 120.

Comments
Topics mentioned in this article
Cricket Vikram Solanki Paul Valthaty Virat Kohli Sunil Joshi Wasim Jaffer Irfan Pathan BAR TN KER UP KAR
Get the latest updates on IPL 2021, check out the IPL 2021 Schedule and Indian Premier League Live Score . Like us on Facebook or follow us on Twitter for more sports updates. You can also download the NDTV Cricket app for Android or iOS.