While Maharashtra advanced to the Ranji Trophy elimination phase by finishing on top of Group C, 40-time champions Mumbai staged a grand comeback from the brink in Group A after conceding a 99-run first innings lead to Gujarat in their final league game before winning outright to qualify for the quarter-final. 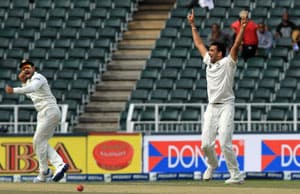 Group toppers Maharashtra will play defending champions Mumbai, who barely made it to the knock-out stage, in the five-day quarter-final of the Ranji Trophy that promises to be a keen fight at the Wankhede Stadium, starting in Mumbai on Wednesday.

While Maharashtra advanced to the elimination phase by finishing on top of Group C, 40-time champions Mumbai staged a grand comeback from the brink in Group A after conceding a 99-run first innings lead to Gujarat in their final league game before winning outright to qualify for the quarter-final.

All these facts would be confined to the dustbin when the two arch-rivals meet in what is considered to be the Maharashtra state version of the well-known 'War of Roses' between Lancashire and Yorkshire in English county cricket.

Though the visitors from across the Sahyadri ranges topped their group that consisted of the championship's weakest teams, they would find Mumbai - bolstered by the return of veteran pacer Zaheer Khan and all-rounder Abhishek Nayar - a tough nut to crack in the latter's backyard.

Zaheer, who will lead the hosts, is available for this game after missing a few earlier when he was with the Indian team in South Africa and his mere presence would lift the Mumbai bowling attack on a track that generally has bounce and assists pacers for the first couple of days.

Maharashtra's leading batsmen - opener Harshad Khadiwale, Kedar Jadhav, Ankit Bawne, captain and wicket keeper Rohit Motwane and India's under-19 Asia cup-winning skipper Vijay Zol - would have their hands full against the home side attack that has been lifted by the selection of experienced left-arm spinner Iqbal Abdulla.

It was Abdulla's 11-wicket (6 for 42 and 5 for 44) haul that dashed Gujarat's hopes at Valsad. He will have support from Mumbai's top wicket taker of the season, Vishal Dabholkar (38 wickets), who also bowls slow left-arm orthodox.

The welcome news for Maharashtra is that Zol, who cracked a hundred earlier in the season and a match-winning hundred against Pakistan in the Asia Cup final at Sharjah last week, has recovered from his groin niggle and is fit to play.

Zol and other top batsmen of the visiting team will have to negotiate Zaheer, his pace partners Shardul Thakur (21 wickets), Javed Khan (22) and the two left arm spinners to give their side a chance.

Mumbai's batting has not looked as formidable this season with the exception of the seasoned Wasim Jaffer and wicket-keeper Aditya Tare.

The absence of Rohit Sharma and Ajinkya Rahane, who are now part of India's ODI and Test teams, has hit the batting strength hard.

Nayar, who has the knack of getting breakthroughs with his slow medium bowling, has not fired at all this season with the bat and also got injured which forced him to miss the team's last few important games.

Suryakumar Yadav has played poor shots and got out which had put extra pressure on the other batsmen. The absence of the steady Hiken Shah, who has split the webbing on his hand, and Siddesh Lad has weakened Mumbai's batting which the Maharashtra bowlers would look to exploit.

The visitors have a decent pace attack spearheaded by Shrikant Munde and are dependent also on the left-arm spin of Akshay Darekar, who will enjoy the bounce offered by the track.

"You cannot underestimate any team that makes it to the quarterfinal. Knowing their history in first class cricket, you have to be at your best," said Maharashtra coach Surendra Bhave when asked about Mumbai.

"I am confident I have got a young side that can perform anywhere in India on any track," said the coach confidently.

The Mumbai skipper was effusive in his praise for Thakur.

"I am particularly very impressed with Shardul. He has got the pace which is required, at a higher level as well. That is very promising. He is someone we should invest in future and hopefully we will get some good performances out of him," Zaheer said.

"Shardul being able to bat as well, that is added responsibility on him. He is a good all round prospect I feel," he added.

The 35-year old also praised Javed Khan and said, "He has got a bit more experience than what Shardul has got. But in terms of raw pace, he has impressed me."

The Indian pace spearhead, who is part of the Test team for the New Zealand tour, said he wants to get more match practice before he leaves.

"It is good to keep in touch. I have always endorsed that I enjoy match practice more than just coming and bowling in the nets. The intensity is different. From that perspective, I am hoping to get more and more games before I go (to New Zealand)," he said.

Asked about the absence of Hiken Shah, Zaheer said the team would miss his services but at the same time it is an opportunity for other players.

"That is one thing, we had concern about. Few of the batters who were playing regularly have got injured now at this stage. So it is an opportunity for others, especially for someone like Vinit, who has been around for a while. We will miss the services of Hiken, he has played some good knocks for the team to get here. Along with a few others, Hiken will also be missed," he said.

Maharashtra captain Rohit Motwani said it is a crucial game for the team, since it is the knockout stage.

"It is an important game for every team that reaches in the top eight. It is a crucial game. We know it is a do or die situation, whoever wins will go further," he said.

He added that the bowlers have done well to pick up 20 wickets on batsmen friendly wickets.

Comments
Topics mentioned in this article
Irfan Pathan Wasim Jaffer Vikram Solanki Cricket Virat Kohli Paul Valthaty MUM India Cricket Team
Get the latest updates on IPL 2020, check out the IPL Schedule for 2020 and Indian Premier League (IPL) Cricket live score . Like us on Facebook or follow us on Twitter for more sports updates. You can also download the NDTV Cricket app for Android or iOS.