Pragyan Ojha picked up 5/30, while Sudip Chatterjee scored an elegant century as Bengal eye big lead against Vidharbha during their Ranji Trophy game in Kolkata. 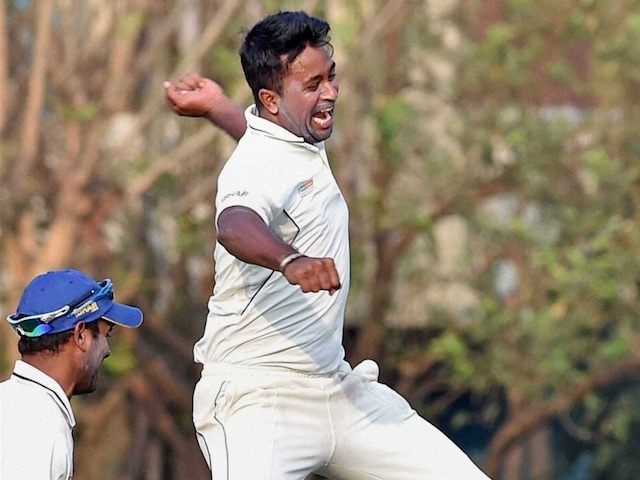 Sudip Chatterjee struck an elegant century under pressure before Pragyan Ojha terrorised Vidarbha with a five-for to put Bengal in command against Vidarbha onÂ the second day of their Ranji Trophy Group A match in Kolkata. (Wasim Jaffer Becomes First Player to Score 10,000 Runs in Ranji Trophy)

On a day Wasim Jaffer of Vidarbha became the first batsman in the 81 years' history of the tournament to notch up 10,000 runs, it was the hosts who brightened their hopes for their first outright win this season at the Jadavpur University second campus ground in Saltlake.

Resuming at 217 for seven, Bengal rode on Chatterjee's fighting 116 with the lower order to post a fighting 334 in the first innings on a track that started toÂ assist spinners.

This was Chatterjee's third century from five matches this season, and fourth from 21 first-class outings.

In reply, Vidarbha closed the day with 193 runs in arrears after being 141 for seven with Ojha (5/30) notching up his first five-wicket haul for Bengal, and 23rd overall.

Ojha gave the first breakthrough of the day when he bowled out Jaffer (9) moments after he completed the milestone.

Down with a knee injury, Ojha was a doubtful starter but the ignored India spinner returned to match fitness in time and displayed superb control as Vidarbha batsmen failed to get in terms against his guile.

Ojha was at his best in his second spell when he scalped four wickets in 37 balls that included two in two balls -- Subramaniam Badrinath (2) and Shalabh Shrivastava (0) -- and was in line for a hattrick as he broke the Vidarbha's back.

Centurion in their win against Maharashtra in their last outing, Faiz Fazal (63 from 120 balls; 6x4s) fought a lone battle but the left-handed opener too was dismissed when Ashok Dinda castled him.

Earlier in the day, Chatterjee, who was unbeaten on 49, showed fine application to hung in and got fine support from Ojha (unbeaten on one) who batted at no 9.

Chatterjee struck back-to-back fours to Shrikant Wagh in the second and third balls of the 112nd over to reach his third century this season as it came off 186 balls with 12 boundaries.

The duo added 53 runs for the eighth wicket before Ojha (17) got out and after that Ashok Dinda contributed a valuable 24 (41b; 4x4s, 1x6s) in another 53-run partnerhsip to frustrate Vidarbha.

Comments
Topics mentioned in this article
Pragyan Ojha Wasim Jaffer Ashok Dinda Subramaniam Badrinath Faiz Fazal Cricket
Get the latest Cricket news, check out the India cricket schedule, Cricket live score . Like us on Facebook or follow us on Twitter for more sports updates. You can also download the NDTV Cricket app for Android or iOS.