After Mumbai took a first-innings lead of 18 runs thanks to Siddesh Lad (93), Karnataka's Manish Pandey scored a century and put on a 133-run stand with Ravikumar Samarth (75) to take his team's lead to 287. The game is interestingly poised, with both teams looking to register an outright win on the final day of the game on Wednesday. 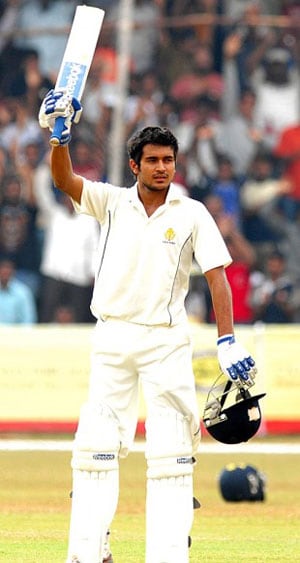 Manish Pandey (119) hit a timely century and raised a 133-run stand with Ravikumar Samarth (75) as Karnataka reached 287 for eight in their second innings against Mumbai in their Group A Ranji match, which is set for an exciting finish in Bangalore.

After dismisisng Mumbai for 269 in the first innings, Karnataka are now 269 runs ahead of Mumbai, who took a vital lead of 18 runs before yesterday's hero Siddesh Lad fell short of his century by seven runs. When stumps were drawn, tailenders KP Appanna and HS Sharath were batting on four and six, respectively.

Pandey and Samarth kept the hopes alive for Karnataka to go for an outright victory after conceding first innings lead to Mumbai. Karnataka began their second innings badly as they lost make-shift opener Karun Nair and stop-gap number three batsman Shreyas Gopal, cheaply for seven and zero, leaving the hosts tottering at 32 for two. Mumbai, however, did not capitalise on the upperhand and lost the opportunity to mount pressure and attack Karnataka batsmen, especially Pandey, whose confidence had dipped after scoring just one in the first innings.

"We should have attacked Karnataka batsmen, especially Pandey after the hosts were struggling at 32 for two. We should have had three slips than two, and placed attacking field," Mumbai coach Sulakshan Kulkarni said.

Pandey looked in a hurry and cracked a quick-fire century off 147 balls with 13 boundaries and two sixes. Samarth also paced his innings superbly by belting 10 boundaries after facing 111 balls.

After the departure of Samarth, who was trapped leg before off Kaustumbh Pawar, Karnataka could add 111 runs and lost five wickets, four in the final session of the day.

CM Gautam (11) and Stuart Binny (18), made brief appearances and gave useful support to Pandey. The centurion lost his wicket to leg-spinner Vishal Dabholkar, handing a catch to Wasim Jaffer.

For Mumbai, pacers Javed Khan and Saurabh Netrawalkar, and Dabholkar bagged two wickets each, while Shardul Thakur and Pawar picked a wicket apiece.

Earlier, resuming on 217 for seven, Mumbai were all out for 269 runs as they batted for 13.4 overs in the morning for an addition of 52 runs. Lad (93) added 34 more runs to his overnight 59 before was the last batsman out. Pacer Sharath added two more wickets to end with figures of five for 57 while Pandey claimed the eighth wicket of the visitors. Mumbai is looking for an outright victory if they manage to bundle out the hosts quickly on Wednesday.

Comments
Topics mentioned in this article
Cricket BAR TN KER UP KAR Sunil Joshi Sourav Ganguly Wasim Jaffer Irfan Pathan Vikram Solanki Virat Kohli Manish Pandey Paul Valthaty
Get the latest updates on IPL 2021, check out the IPL 2021 Schedule and Indian Premier League Live Score . Like us on Facebook or follow us on Twitter for more sports updates. You can also download the NDTV Cricket app for Android or iOS.