Defending Ranji Trophy champions Karnataka registered their second outright win in the tournament when they defeated Odisha by an innings and 64 runs in Mysore. 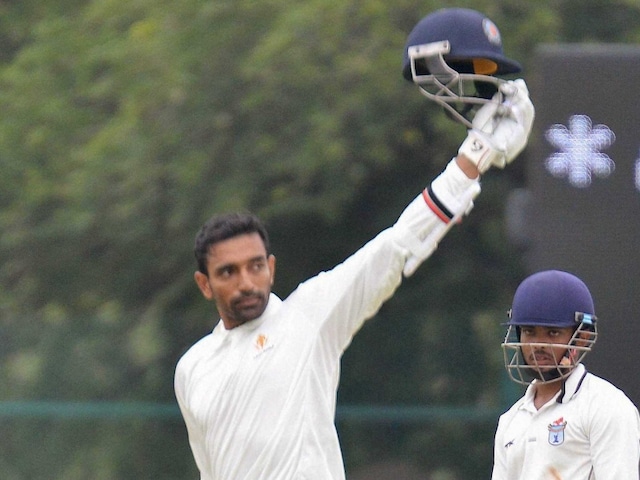 Karnataka registered their second outright win, beating Odisha by an innings and 64 runs on the fourth and final day of their Group A Ranji Trophy match in Mysore. (Latest Cricket News)

With this win Karnataka secured seven points, and are among the top contenders to qualify for the knockout stage with 21 points to their credit.

Stuart Binny and Shreyas Gopal, ably supported by Vinay Kumar, helped Karnataka skittle out Odisha for 104 runs in their second innings under 37 overs.

Binny claimed four wickets for 34 runs and Gopal bagged three wickets for 43 runs, while Kumar ended with two for seven off seven overs and Udit Patel picked up one wicket.

Batting first, Odisha put on 232 all out in their first innings with Govinda Poddar scoring 153 runs after he had smashed 15 boundaries and a six off 230 balls.

In reply, Karnataka declared their first innings at 400 for nine after India discard Robin Uthappa scored his second century of the season with a superb 148 runs. He had scored his first ton against Rajasthan in the previous match.

Resuming at the overnight score of zero for one, Odisha started on a disastrous note, losing first innings centurion Poddar, who was caught by Abhishek Reddy off Kumar for seven.

Binny turned the tide completely in Karnataka's favour after he claimed two wickets in consecutive deliveries, first he sent back Nataraj Behera (19) and then Ranjit Singh for a naught.

After the fall of Singh, no batsman held the crease and with Karnataka bowlers, especially Binny and Gopal, wrecking havoc.

Anurag Sarangi was the top scorer for Odisha with 44 runs with six boundaries, scored off 75 balls.

To the dismay of Odisha, they lost four batsmen -- Rajesh Dhuper, Singh, Biplab Samanataray and Basant Mohanty --without opening an account.

Comments
Topics mentioned in this article
KAR ODI Robin Uthappa Biplab Samantray Cricket
Get the latest Cricket news, check out the India cricket schedule, Cricket live score . Like us on Facebook or follow us on Twitter for more sports updates. You can also download the NDTV Cricket app for Android or iOS.