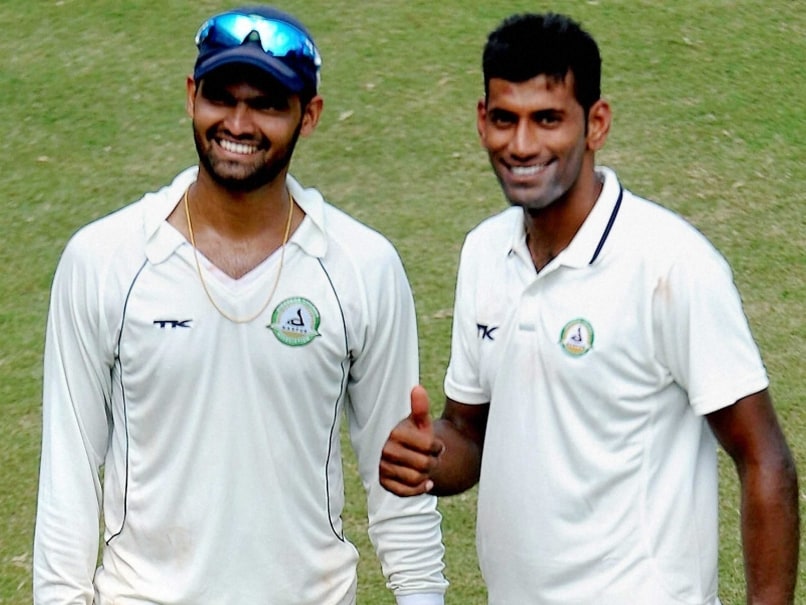 Off-spinner Akshay Wakhare felt that scoring is difficult as the pitch has some uneven bounce nd would look to wrap Bengal under 250.© PTI
Kolkata:

Hosts Bengal squandered a splendid start to close the day one at 217 for 7 as Vidarbha rode on off-spinner Akshay Wakhare 4 for 40 to bounce back in their Ranji Trophy match in Kolkata. (Read More in Cricket)

Abhimanyu Easwaran (58) and Sayan Sekhar Mondal (56) gave Bengal a spectacular start with their 118-run partnership after being invited to bat on a green top at the Jadavpur University (second campus) ground in Saltlake.

But the hosts went on to lose four wickets for 22 runs with left-arm seamer Shrikant Wagh (2/34) and Wakhare swinging into action. Skipper Manoj Tiwary (3) and Shreevats Goswami (1) went cheaply.

With wickets falling at the other end, it was left-hand batsman Sudip Chatterjee who hung around at No 3 to arrest the slide and remained unbeaten on 49 with Pragyan Ojha (one) at the other end at close.

Making a comeback into the side after recovering from an injury, the 20-year-old Easwaran survived an early scare when on nine he was bowled by Swapnil Bandiwar in the sixth over of the day but to his luck the Vidarbha bowler had over-stepped.

Easwaran went on to notch his sixth first class half-century in the post-lunch session, while two overs later Mondal struck his maiden 50.

Soon, all hell broke loose for Bengal after Easwaran edged one behind the stumps with Wagh giving the breakthrough in the 44th over.

Fresh from his seven-wicket match haul in their win over Maharashtra, Wakhare joined in the party castling Mondal in space of nine balls.

Wagh then took the big scalp of the Bengal skipper Manoj Tiwary (3) who perished after poking at an away going delivery to be dismissed caught behind.

Wakhare continued his marathon 18-over spell and took four wickets.

Asked about the green top on offer, Wakhare said: "The pitch looks deceptive. If you bowl in the right areas, the ball is drifting. Scoring is difficult as it has some uneven bounce. We'll try to wrap Bengal under 250."

For Bengal, it all will depend on how Chatterjee and Ojha bat in the early morning conditions tomorrow.

Comments
Topics mentioned in this article
Manoj Tiwary Shreevats Goswami Pragyan Ojha BEN VID Cricket
Get the latest updates on Fifa Worldcup 2022 and check out  Fifa World Cup Schedule, Stats and Live Cricket Score. Like us on Facebook or follow us on Twitter for more sports updates. You can also download the NDTV Cricket app for Android or iOS.