Rahul Dravid says cricketing mentors go beyond what coaches do

Rahul Dravid says coaching is a task-oriented job and mentoring is relationship-oriented. 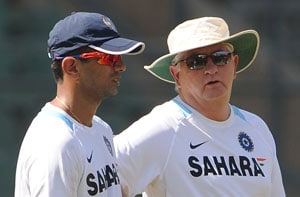 Former India captain Rahul Dravid today said young and budding cricketers should vouch for mentors not coaches to develop themselves as a worldclass players.

"Young players should be looking at mentors not coaches. A lot of youngsters think that they will make themselves a world-class players through coaching academies," he said at the Club Day organised by KSCA on the occasion of Platinum Jubilee celebrations here.

Dravid said coaching is a task-oriented job and mentoring is relationship-oriented. "Coaches focus on concrete issues of the game but mentors go beyond what coaches do. Their focus is on matters including self-confidence and self-perception," he explained.

"Coach Ramakant Achrekar never stuffed techinal aspects of the game in young Sachin Tendulkar's mind. Instead he gave him opportunities to play games almost everyday and made him bat for five hours in the nets which made him what he is today. In real sense, he was a mentor not a coach to the Mumbaikar," he said.

Former fast bowler Javagal Srinath said players should look at coaching only it is required to correct technical faults.

"They should interact more with senior players as Rahul used to do with G R Vishwanath and Syed Kirmani while travelling in a train to play Ranji matches," he said.

To make his point, Srinath gave the example of Australian great Dennis Lilee's interaction with him at the MRF camp at Chennai.

"When I reached MRF training camp a week ahead of Lillee's arrival. The coach there, after watching me bowl at the nets, ruled me out that I could not bowl," he said.

"But in came Lilee and he immediately found the problem and came up to me and asked whether I had bowled for the last six months? The great Australian great hit the bull's eye and said nobody on this earth could bowl at right areas without playing for the last six months. That was enough and gained confidence. Now, this is the type of coaching is required," Srinath said.

Comments
Topics mentioned in this article
Munaf Patel Javagal Srinath Cricket Dennis Keith Lillee Rahul Dravid Zaheer Khan Ashish Nehra Sachin Ramesh Tendulkar
Get the latest updates on India vs South Africa and check out  Schedule, Results and Live Score. Like us on Facebook or follow us on Twitter for more sports updates. You can also download the NDTV Cricket app for Android or iOS.