Australia captain Ricky Ponting on Friday hailed Shoaib Akhtar, saying the Pakistani paceman was the fastest bowler he has ever faced. 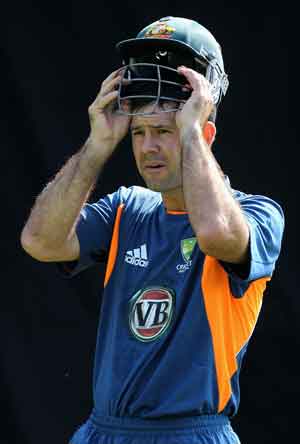 Australia captain Ricky Ponting on Friday hailed Shoaib Akhtar, saying the Pakistani paceman was the fastest bowler he has ever faced.

"Congratulations to him for being an outstanding cricketer," Ponting said of Akhtar who on Thursday announced he will retire after the World Cup.

"I had some great duels with Shoaib over the years. To this day I always said he is the fastest bowler I have faced in international cricket," added Ponting of Akhtar who broke the 100mph barrier in 2003.

Ponting said he remembered a particularly fierce spell from Akhtar at Perth in 1999.

"His one spell that everyone can watch on the internet of him bowling at me at the WACA that was reasonably entertaining, more so entertaining for Justin Langer I think.

"Langer was at the other end laughing at me all the time when I was trying to keep all the deliveries of Shoaib out. He was express pace, a very, very good bowler."

Ponting lamented the fact Akhtar suffered many injuries during his career.

"I guess over the years he's just faced a number of injuries which did not allow him to play as much as he would have liked.

"But even in this tournament he still had the new ball, he still has good pace, his experience obviously helped him in different times as well."

Akhtar also described Ponting as one of the best batsmen he had ever faced down.

"I admire the way Ponting bats. He is one of my favourites, like Brian Lara and Adam Gilchrist," said Akhtar.

Comments
Topics mentioned in this article
Cricket Shoaib Akhtar Ricky Ponting
Get the latest updates on ICC T20 Worldcup 2022 and CWG 2022 check out the Schedule, Live Score and Medals Tally. Like us on Facebook or follow us on Twitter for more sports updates. You can also download the NDTV Cricket app for Android or iOS.