Juneja hopes that India A can press for a win after his 178 put the home team in control against New Zealand A. 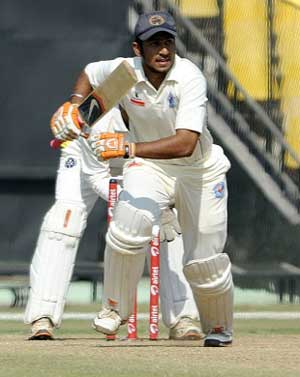 Irrespective of what people think about Indian Premier League but Manprit Juneja is certainly enjoying the positives gained for having been with Delhi Daredevils for two seasons as he cracked an unbeaten 178 against New Zealand A in a four-day game here on Wednesday.

"Their premier bowler is Doug Bracewell and having faced him at the Delhi Daredevils nets have really helped me. I have had long net sessions against Bracewell and knew what pace he bowls and his areas of strength," the softspoken Juneja told PTI over phone from Visakhapatnam.

"I would say every tournament has its pluses, whether it's Ranji Trophy which helps you in preparing for longer format or IPL where you get to play best bowlers. The small contributions that I made in IPL (48 vs MI at Wankhede) had helped me evolve as a player," Juneja added.

Asked whether he rates his knock of 178 not out above his debut double hundred against Tamil Nadu in Ranji Trophy, the 22-year-old said, "No, I think my debut double hundred was a better effort. Today's innings was satisfying but I am not entirely happy. Yes, I am happy that I have managed to bat the whole day. Also would like to thank Jagadeesh and Nayar bhai (Abhishek) for their support."

With 22 runs required to score a double hundred, is he tensed? He quickly answered, "I would have been tense if I would be 190 not out but not at 178 n.o. It's still some distance to go," the stylish right-hander said.

Asked if an outright victory is possible, Juneja said, "We will be positive from the start and see how it goes. The pitch is a slow one and one has to work really hard as a bowler to make things happen."

Comments
Topics mentioned in this article
Manpreet Juneja Cricket Doug Bollinger
Get the latest updates on IPL 2021, IPL Points Table , IPL Schedule 2021 , live score . Like us on Facebook or follow us on Twitter for more sports updates. You can also download the NDTV Cricket app for Android or iOS.