Younis Khan was demoted to category B in the Pakistan Cricket Board's central contract scheme. 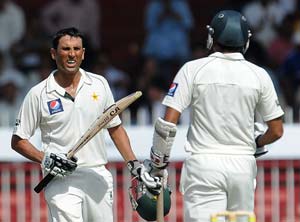 Some PCB officials have insisted that it was compulsory for players to sign the contracts.

His demotion to category B may have raised a few eyebrows in Pakistan cricket circles but veteran batsman Younis Khan is "expected" to sign on the dotted line as the PCB makes no "exceptions" for any individual, insists chief selector Moin Khan.

"The players who are offered these contracts are expected to sign the contracts because the board can't make exceptions for anyone," Moin said.

Some PCB officials have insisted that it was compulsory for players to sign the contracts. Asked if any player didn't wish to sign and agrees to play without a central contract for Pakistan as Younis had indicated, Moin said, "I think this is a policy which only the board can best explain."

His comments came just hours after another senior board official, Zakir Khan had said it was mandatory for players to sign the contracts.

Zakir said those not signing the contract could be sidelined from selection. Moin, Zakir and the head coach of the national cricket academy, Mohammad Akram were on the committee that finalised the list of 32 players who have been given contracts in four categories.

A source close to Younis said the senior batsman had just received his contract copy and was going through it.

"But clearly he is not happy at his demotion and could forgo the monthly retainer fees and decide to just play for Pakistan with the match fees," he said.

Younis remains one of the most popular players on the Pakistan circuit and juniors have a lot of respect for him and some of them are also said to be surprised by his demotion.

Justifying PCB's move to demote Younis, Moin said players were categorised as per a new policy under which those who have played all the three formats were considered for the top category, before taking into consideration seniority and performance.

Moin, meanwhile, said that players who don't meet fitness targets given to them in the central contracts will be docked from their monthly retainers.

The former captain said that players had been given specific targets to attain individual levels in their contracts which would be reviewed in September.

"I can't disclose names of those players who were given these targets or their details but if they don't meet these targets they will be docked from their monthly retainer amounts," he added.