The game at Adelaide was a tough one for Australia's bowling unit. And so the fast bowlers Peter Siddle and Ben Hilfenhaus have been rested from the Perth Test. 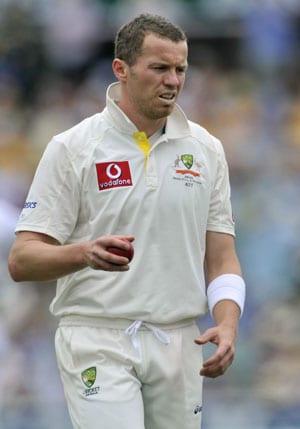 Fast bowlers Peter Siddle and Ben Hilfenhaus were Thursday left out of the Australian team for the third Test in Perth after their exhausting workload in Adelaide.

Instead pace quartet Mitchell Johnson, Mitchell Starc, Josh Hazlewood and John Hastings were named in the 12-man squad, while star all-rounder Shane Watson will play after recovering from a calf injury.

Right-arm quick James Pattinson was a forced omission due to a side strain, while Siddle and Hilfenhaus rested after the drawn Adelaide Test.

Should Johnson return, it would mark his first Test since breaking down with a toe injury in South Africa last November.

Hastings and Hazlewood will make their Test debuts if they play.

Comments
Topics mentioned in this article
Cricket Peter Siddle South Africa Cricket Team Ricky Ponting Australia Cricket Team Ben Hilfenhaus Michael Clarke John Michael Arthur
Get the latest updates on ICC T20 Worldcup 2022, check out the Schedule and Live Score. Like us on Facebook or follow us on Twitter for more sports updates. You can also download the NDTV Cricket app for Android or iOS.