The pace troika of Junaid Khan, Anwar Ali and Ali Asad were caught off-guard by television cameras belonging to Geo News channel when they visited one of the theatres in Lahore. 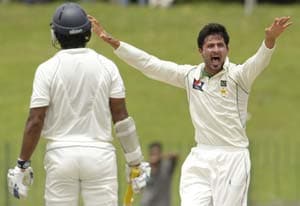 The newly-appointed manager of the Pakistan team, Moin Khan might have spoken aloud about the importance of discipline in the side before leaving for Zimbabwe, but an incident involving current players has left the cricket Board red-faced. Three members of the national team were found watching a popular dance show notorious for raunchy acts.

The pace troika of Junaid Khan, Anwar Ali and Ali Asad were caught off-guard by television cameras belonging to Geo News channel when they visited one of the theatres in Lahore to watch a dance show hours before the team's departure for Zimbabwe. Pakistan are scheduled to play two T20 internationals, three ODIs and two Tests, starting August 23.

Most of these dance shows are notorious for being a front for vulgar dances by actresses on stage -- one reason why they are so popular among the public.

The channel clearly was in no mood to let go the players and came up with some sarcastic comments on their appearance. One of the dancer said she was delighted to see the three Pakistani cricketers among the audience.

"It was exciting to see Junaid in the hall. He is the favorite player for many of us," she said.

The PCB was unavailable for comments.

Comments
Topics mentioned in this article
Cricket Moin Khan Ali Asad Junaid Khan Zimbabwe Cricket Team Pakistan Cricket Team
Get the latest updates on IPL 2020, check out the IPL Schedule for 2020 and Indian Premier League (IPL) Cricket live score . Like us on Facebook or follow us on Twitter for more sports updates. You can also download the NDTV Cricket app for Android or iOS.