Zaman smashed 210 not out from 156 deliveries, moving past the previous record for a Pakistan batsman set by Saeed Anwar with his 194 more than 21 years ago. 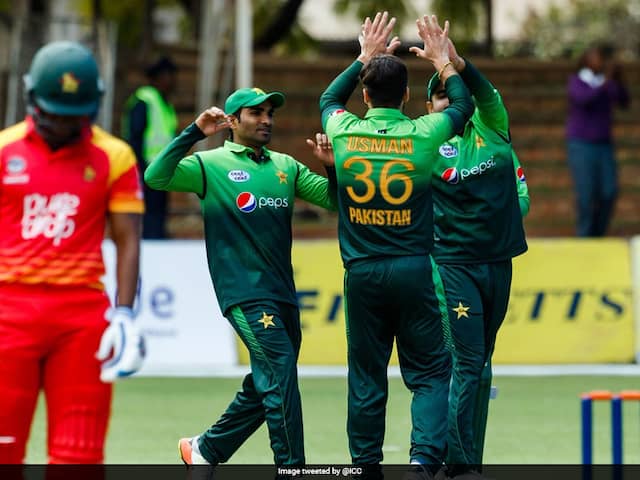 Zimbabwe's 244-run defeat was their second heaviest in ODIs.© Twitter

Fakhar Zaman became the first Pakistan player to hit a double century in one-day internationals as Pakistan crushed Zimbabwe by 244 runs to go 4-0 up in their one-day series. Zaman smashed 210 not out from 156 deliveries, moving past the previous record for a Pakistan batsman set by Saeed Anwar with his 194 more than 21 years ago. That wasn't the only record to tumble. Pakistan's openers blazed a world record 304-run stand, with Imam-ul-Haq hitting 113, the triple hundred partnership becoming Pakistan's biggest for any wicket in Od I's.

It also broke the previous record for an opening stand in all internationals, set by Sarnath Jamahiriyas and Pul Charanga for Sri Lanka against England at Heading ley in 2006.

When the opening partnership was eventually snapped, Sif Ali arrived at the crease and immediately went on the attack, smashing 50 from 22 deliveries to help boost Pakistan to another record: their highest ever total in Odis.

Zimbabwe's response never got going, and they were lucky to avoid a few other ignominious records when they were bowled out in the 43Rd over for 155.

Zimbabwe's 244-run defeat was their second heaviest in ODIs, and they avoided that calamity only through a 69-run sixth wicket stand between Elton Waggumbura and Donald Timpano.

But that was as good as it got for the hosts, with leg-spinner Shadai Khan taking four for 28 as Pakistan wrapped up the innings having barely broken a sweat.