Ajmal had on Tuesday night said that he didn't see much difference between local and foreign coaches except for the better money paid to foreigners. 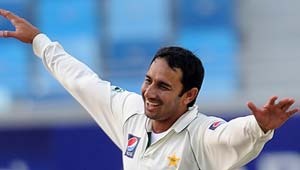 The Pakistan Cricket Board is in damage-control mode to avoid a fallout between the national team's head coach Dav Whatmore and champion spinner Saeed Ajmal ahead of a tough series against South Africa in the UAE.

The fallout came after Whatmore took offence to remarks made by Ajmal during a television show where he was asked about the difference between local and foreign coaches.

"Just read Ajmal's quotes. Deeply upset and hurt by his remarks. Just when you think you know someone!!" Whatmore tweeted yesterday evening.

Ajmal had on Tuesday night said that he didn't see much difference between local and foreign coaches except for the better money paid to foreigners.

The PCB then moved into damage control mode issuing a press release in which it said it had asked Ajmal to apologise to Whatmore.

"Ajmal had fallen prey to some tricky questions in the media. PCB advised Saeed Ajmal to meet Dav Whatmore and apologise to him for hurting his sentiments. Saeed apologised to Dav saying 'people who know me understand that I mean no harm to anyone and that is why as soon as I came to know of this unfortunate media story, I went up to Dav and apologised," the release said.

Whatmore then tweeted that Ajmal had come to meet him and apologised.

But an insider said that the former Australian player was still smarting from Ajmal's remarks and was upset at the way the spinner had dismissed his credibility.

The PCB also tried to pacify Whatmore in its release saying it valued his contribution to Pakistan cricket.

"Dav has worked tirelessly with the Pakistan team and it would be extremely unfair not to recognise his services. I enjoy very good relations with Dav and I am hopeful of continuing this in the coming series," the release quoted Ajmal as saying.

Ajmal, in his remarks on the channel, had said there is no difference between a local and foreign coach with reference to Whatmore.

"Just that we are paying more to him, otherwise there is no difference," he had said.

Comments
Topics mentioned in this article
Cricket Mohammad Asif Zulqarnain Haider Stuart Broad Saeed Ajmal Zaheer Abbas Davenell Frederick Whatmore
Get the latest updates on ICC T20 Worldcup 2022 and CWG 2022 check out the Schedule, Live Score and Medals Tally. Like us on Facebook or follow us on Twitter for more sports updates. You can also download the NDTV Cricket app for Android or iOS.