Railways pacer Karan Thakur recorded figures of 28.5-5-77-10 against Baroda in CK Nayudu Trophy, which is BCCI's Under-25 tournament. 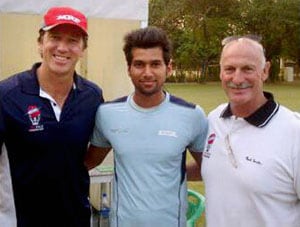 Young and unheralded Railways pacer Karan Thakur on Saturday created history by becoming the first bowler in CK Nayudu Trophy (BCCI U-25 Meet) to take all 10 wickets in an innings against Baroda at the Reliance Stadium in Vadodara.

Thakur has been regularly training at the MRF Pace Academy and also had sessions with Aussie great Glenn McGrath.

"I have been fortunate to have interacted with McGrath sir a couple of times at the academy. He gave some invaluable tips on channel bowling and using the subtle variations. My strength is bowling out swingers," a beaming Karan told PTI over phone from Vadodara.

"I am really proud of my achievements but would have been happier had Railways won on a day which was memorable for me. Yesterday, I had taken five wickets but never thought that I would be able to take all 10 wickets in an innings," the elated youngster stated.

Asked when exactly did he think that he could get 10 wickets in an innings, Karan replied, "When I got the eighth wicket, I felt that I might get 10 wickets. It was a great feeling when I got the 10th victim. The umpires presented me with the match ball, a souvenir that I would like to treasure forever."

Karan is doing his BA Program from Sri Venkatswara College in New Delhi and is already a full-time employee of the Indian Railways.

"I am in the Ranji Trophy probables but I would not like to think too far ahead. Definitely, it is a dream to play Ranji Trophy but my job is to perform in the matches I am playing," Karan added.

Senior Railways team chief coach Abhay Sharma was effusive in his praise for the young lad.

"Obviously, it's a great achievement. He was in the probables for the Ranji Trophy. It doesn't happen everyday at this level (a notch below Ranji Trophy) where a bowler gets all 10 wickets. It's easy to get seven or eight but for 10 wickets, you need discipline as well as a bit of luck," Sharma told PTI.

When asked whether Thakur could be blooded in the next Ranji game against Bengal, Sharma was non-committal, "I don't know as it depends on the selection committee. My job is to prepare the players for the match."

Comments
Topics mentioned in this article
Cricket Harmeet Singh
Get the latest updates on IPL 2021, IPL Points Table , IPL Schedule 2021 , live score . Like us on Facebook or follow us on Twitter for more sports updates. You can also download the NDTV Cricket app for Android or iOS.