Ajinkya Rahane was in terrible form during the three-Test series against Sri Lanka. 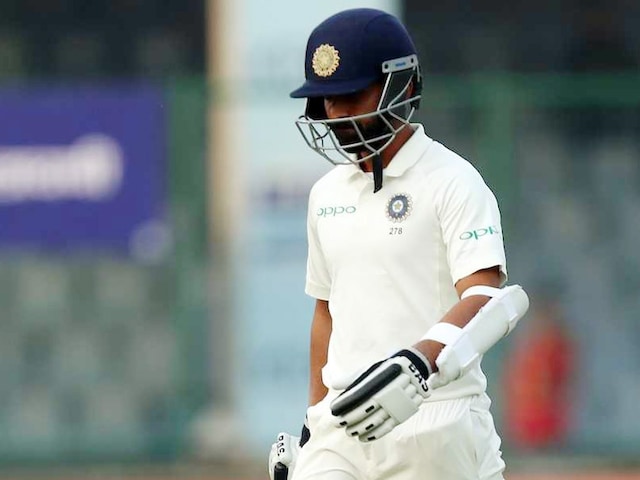 Star batsman Ajiknya Rahane's form remains a cause of concern for India ahead of the crucial tour to South Africa. Rahane, who in the last couple of years has been India's most consistent batsman in whites, is currently in the middle of a difficult phase. While other Indian batsmen plundered the Sri Lankan bowling attack, Rahane could only manage a top score of 10 in five outings. In order to give him more time in middle, the Indian team management promoted him to number three in the batting order in the second innings against the Lankans in Delhi.

That decision turned out to be the catalyst for Twitter exchange between two former India cricketers - Vinod Kambli and Aakash Chopra. " Good on India to send Rahane at 3....must get some runs before boarding the flight to SA. #IndvSL," Chopra, who was part of the commentary team for the recently concluded series, tweeted. Rahane's Mumbai senior shot back, saying "MR CHOPRA,how will he get runs? Can you suggest ??????".

Good on India to send Rahane at 3....must get some runs before boarding the flight to SA. #IndvSL

Mr chopra,how will he get runs? Do you have any solution for that pls advise?????? https://t.co/19uSx3jZlP

Kambli persisted with his question despite Chopra having ignored it.

@cricketaakash.Mr Chopra the main question remains unanswered.Where and how he should scores runs???

With Kambli sticking to his line of questioning, Chopra proposed taking the discussion off Twitter.

We should get on a call and discuss this...instead of doing it here. You know where to get my number from... ????

The misfiring Rahane was backed by the team's batting coach Sanjay Bangar during the recently concluded Sri Lanka series.

"He is one of the few players who has scored in every overseas country we have toured. That shows the quality he possesses. He is a quality player who has always performed when the chips are down for the team. He will be hurting with the kind of dismissals he has had but he is too good a player to not score runs for a long time."

Comments
Topics mentioned in this article
India Cricket Team South Africa Cricket Team Ajinkya Rahane Aakash Chopra Vinod Kambli Cricket
Get the latest Cricket news, check out the India cricket schedule, Cricket live score . Like us on Facebook or follow us on Twitter for more sports updates. You can also download the NDTV Cricket app for Android or iOS.