"How Is It Possible": Confusion Over Revised DLS Target Halts New Zealand vs Bangladesh 2nd T20I

New Zealand vs Bangladesh, 2nd T20I: The play was halted 1.3 overs into Bangladesh's run chase as there was some confusion about the revised target as per the DLS method. 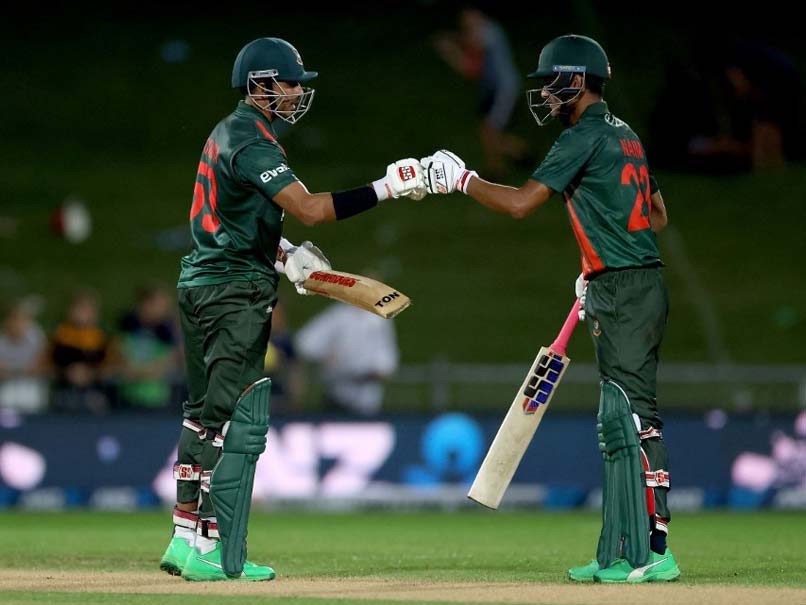 NZ vs BAN: Bangladesh were given a revised target of 170 to chase in 16 overs.© AFP

Over the years, there have been instances where play has been halted due to bizarre reasons and one such instance presented itself to fans during the second T20I match between New Zealand and Bangladesh on Tuesday -- lack of a revised target. In the second game of the three-match series, play was halted as there was some confusion among Bangladesh players regarding the revised target they were chasing. When the second innings resumed, it looked like Bangladesh had to chase 148 in 16 overs after the target was adjusted as per the DLS method.

But after 1.3 overs, play was stopped and the umpires took custody of the ball as there was confusion regarding the target Bangladesh were chasing. Play was halted for almost five minutes and after some number crunching, it came to the fore that Bangladesh have to chase 170 runs in 16 overs. The play resumed only after the match referee Jeff Crowe and on-field umpires Chris Brown and Chris Gaffaney conveyed the target to Bangladeshplayers.

New Zealand all-rounder Jimmy Neesham was not amused with the situation and he asked how can a team come out to bat not knowing what target they are chasing.

"How is it possible to start a run chase without knowing what you're chasing? Crazy stuff. #NZvBAN," tweeted Neesham.

How is it possible to start a run chase without knowing what you're chasing? Crazy stuff. #NZvBAN

Earlier, Glenn Phillips played an unbeaten knock of 58 runs as New Zealand scored 173/5 in 17.5 overs. Rain played spoilsport in the first innings and after the DLS method, Bangladesh were given a target of 170 in 16 overs.

Asked to bat first, Kiwi openers Fin Allen and Martin Guptill put on 36 runs inside the first four overs, but Bangladesh made a strong comeback as the visitors reduced New Zealand to 55/3 in the seventh over. Allen (17), Guptill (21), and Devon Conway (15) departed in quick succession for the hosts.

Will Young and Glenn Phillips then got together at the crease and the duo put on 39 runs for the fourth wicket, but as soon as the time came to accelerate, the hosts faced another roadblock as Mahedi Hasan dismissed Young (14), reducing New Zealand to 94/4 in the 12th over.

With New Zealand's score at 102/4 in the 13th over, rain played spoilsport and the match had to be stopped. However, the break was not for long and the game resumed soon after. Phillips and Daryl Mitchell went berserk in the final overs and the duo accumulated runs at a brisk pace.

However, rain once again halted the play in the 18th over with the New Zealand score being 173/5. The hosts were not able to bat for their full quota of 20 overs and as a result, after the DLS method, Bangladesh were given a target of 170 from 16 overs.

Bangladesh Cricket Team Cricket New Zealand vs Bangladesh, 2nd T20I
Get the latest updates on ICC T20 Worldcup 2022, check out the Schedule and Live Score. Like us on Facebook or follow us on Twitter for more sports updates. You can also download the NDTV Cricket app for Android or iOS.