Kings XI Punjab have won both their Champions League Twenty20 matches but Northern Knights' Scott Styris says they can beat the Indian side if they play to their potential. 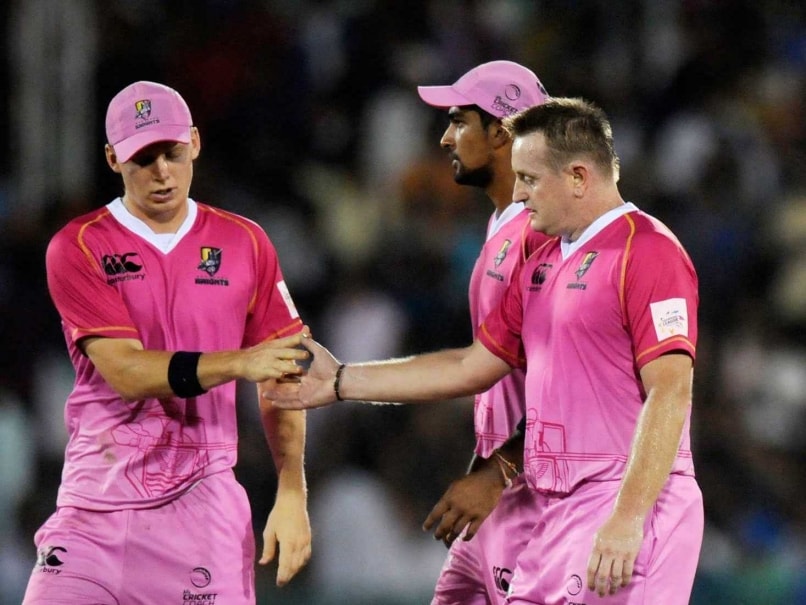 Scott Styris of Northern Districts celebrates the wicket of Kusal Perera of Southern Express during the qualifier 1 match of Champions League Twenty20 between the Northern Knights and the Southern Express held at the Chhattisgarh International Cricket Stadium, Raipur.© BCCI
Mohali:

Northern Knights would not get intimidated by the might of the Kings XI Punjab says Scott Styris as the Kiwi side are all set to lock horns with the IPL finalists. (Match preview)

Styris said if they play to their potential they need not fear any team. (Punjab captain Bailey says he respects Northern Knights)

"We know they are a good team, they play well in the IPL, but we don't fear them, we respect them. They have got lot of fantastic players, most of our guys who have played against the players in the Kings XI team, whether be for their countries or some guys in the IPL too, we don't fear them or put them on a pedestal in any way," Styris, a veteran of 199 T20s, told reporters on the eve of the match. (Complete coverage of Champions League Twenty20)

"We do know they are a good side, but we also think that we are also a very good side and if we play well we can beat anyone as we showed against Mumbai," the 39-year-old veteran all-rounder said.

Knights notched up a win in their first group match against Cape Cobras, riding on the back of Kane Williamson's unbeaten 101 but suffered a 86-run defeat at the hands of Hobart Hurricanes on Tuesday.

Asked if the team had put the last game's defeat behind them, Styris, who was the top scorer with 37 said, "Yeah, we have. We have had a good discussion about what we thought we could improve on from the last game and we can put into place for the match tomorrow."

Asked that his batting hasn't been really tested yet in the competition so far, Styris said that he is part of the middle-order that has not got much to play simply because of that top order doing so well.

Asked if the team had a strategy for top-oder Kings XI batsmen, he said, "We look at every single player, not just Maxwell, Miller or Bailey or anyone in particular, we look at all the players that we are likely to come up with, batting and bowling, so that we have no surprises."

Kiwis, Knights coach James Pamment was all praise for their domestic T20 structure.

"I think we are developing more and more cricketers.

There is now more depth in New Zealand cricket than perhaps there has been historically. We have always produced very good players, but I think we are now producing more talent right throughout our four-five six major associations."

About the tournaments such as the Champions League, the coach felt this competition is being more respected now by New Zealand teams.

"We are preparing a lot better than what perhaps the initial teams who came over here did and we see it as a great opportunity to promote our players, not only our Association winning this competition but promoting our individual players on to the stage where things like IPL and obviously international opportunities coming from that as well," Pamment said.

With team playing out of Raipur now, Styris said the conditions in Mohali were familiar, even as the team were enjoying travelling to different parts of the country.

"It's been great for our guys, we have had two weeks in Raipur, we have been looked after fantastically well. The new ground in Raipur is great, but the guys are ready for change.

We are delighted to be in India and seeing other parts of the country and the ground here we have known as a fantastic ground. We have been watching the games on TV too, so we know conditions here," he said.

"The scoring has not been really high and whether it is good spin or good pace, I think it is good bowling that will help," he added.

Asked about his longevity, Styris said, "I think it's due to the fantastic fitness regime."

Comments
Topics mentioned in this article
Scott Styris Northern Knights Kings XI Punjab Cricket
Get the latest updates on SA vs IND 2021-22, check out the Schedule and Live Score . Like us on Facebook or follow us on Twitter for more sports updates. You can also download the NDTV Cricket app for Android or iOS.