MS Dhoni, former India captain, was among four players who were left out of the Board of Control for Cricket in India (BCCI) centrally contracted players' list on Thursday. MS Dhoni, who was a part of the Grade A in the last year's contract, has been out of action since India's World Cup 2019 semi-final exit after they suffered a heartbreaking loss to New Zealand. Apart from MS Dhoni, Dinesh Karthik, Khaleel Ahmed and recently retired Ambati Rayudu have been left out of the BCCI's centrally contracted list of players. 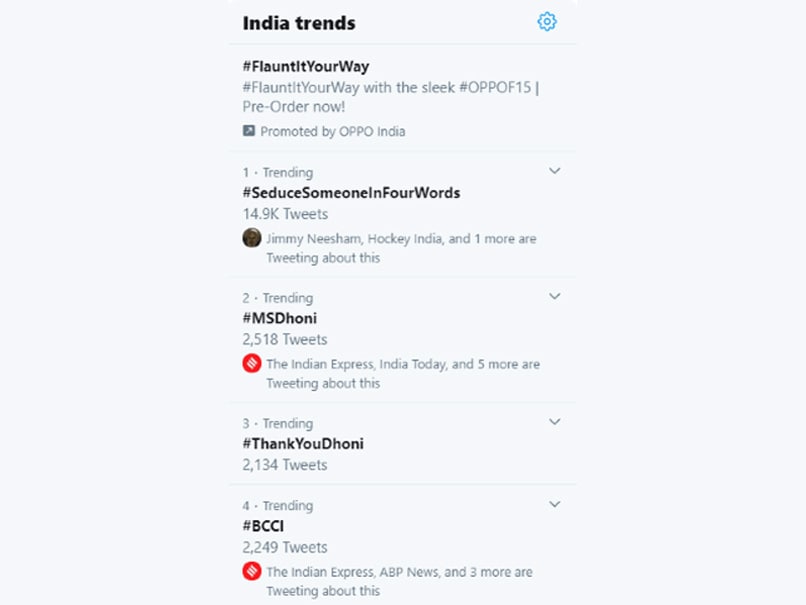 "So, its END OF AN ERA ... Dhoni dropped from BCCI Central Contract players list ... Set one game in Ranchi or in Vizag, where he made 145 to become International Star as his last ODI and send him off #ThankYouDhoni," a fan tweeted.

Set one game in Ranchi or in Vizag, where he made 145 to become International Star as his last ODI and send him off #ThankYouDhoni

"End of the magnificent and unmatchable Saga. #ThankYouDhoni," another one joined in.

You can't even expect this type of end #ThankYouDhoni pic.twitter.com/qUr4MxDKAi

MS Dhoni has been on a sabbatical from cricket for over six months.

Former India batsman Sunil Gavaskar had questioned Dhoni's absence from cricket and asked, "does anybody keep himself away from playing for India for that long?".

India head coach Ravi Shastri had earlier hinted that the former India captain might soon end his ODI career while he will be in line for the upcoming T20 World Cup, scheduled to be played in Australia in October.

"I have had a conversation with MS and that is between us. He has finished his Test career, he may soon end his ODI career... In all probability, he will finish one-day cricket," Shastri had said.

MS Dhoni Cricket
Get the latest Indian Premier League 2020 news, check out the IPL 2020 schedule, Cricket live score . Like us on Facebook or follow us on Twitter for more IPL 2020 updates. You can also download the NDTV Cricket app for Android or iOS.
Highlights
Related Articles