New Zealand beat Pakistan by 101 runs on Wednesday after a thrilling finish to the first Test in Mount Maunganui, where the visitors were just 27 balls from pulling off a battling draw. 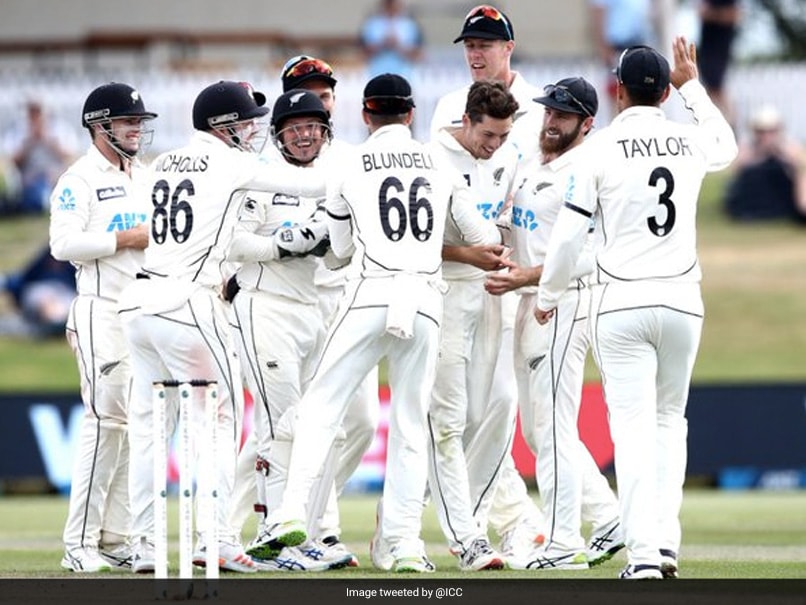 Mitchell Santner picked up the final wicket to wrap up a thrilling win for New Zealand.© Twitter

New Zealand beat Pakistan by 101 runs on Wednesday after a thrilling finish to the first Testin Mount Maunganui, where the visitors were just 27 balls from pulling off a battling draw. Tail-enders Shaheen Afridi and Naseem Shah blocked for seven overs in fading light before Naseem was caught and bowled by spinner Mitchell Santner for one, ending Pakistan's resistance. The end for Pakistan had begun when Kyle Jamieson, celebrating his 26th birthday, broke the 165-run fifth-wicket stand by Fawad Alam and Mohammad Rizwan. The victory was crucial for New Zealand, who need to sweep the two-Test series to have a chance of making the World Test Championshipfinal at Lord's in June.

Once Jamieson claimed the crucial wicket of Rizwan, lbw for 60, Neil Wagner -- bowling despite breaking two toes while batting -- removed Alam for 102 and New Zealand were into the tail as Pakistan folded from 240 for four to be all out for 271.

Jamieson produced a particularly miserly spell after the tea break when he sent down nine overs and took two for four.

Apart from when Pakistan whipped out the New Zealand openers cheaply on day one, the match had been in New Zealand's control until Rizwan, the stand-in skipper, joined Alam in the middle with Pakistan 75 for four on the final morning.

By tea, Alam and Rizwan were still together, Pakistan had narrowed the target to 158 in 36 overs and New Zealand still needed six wickets.

But Jamieson removed Rizwan 11 overs into the final session.

Jamieson had gone close several times previously, and even his lbw shout against Rizwan was turned down before the umpire's decision was overturned on review.

Alam, who had occupied the crease with Rizwan for more than 63 overs, lasted three more overs until he gloved a Wagner short ball to wicketkeeper BJ Watling down the leg side.

Alam had been discarded by Pakistan in 2009 after three Tests and a best innings of 168, and since his recall this year his highest score was 21 against England in August.

There were a few loose shots early in his innings and a nerve-wracking moment when a ball ricocheted off his arm and bounced dangerously close to the stumps.

Otherwise, he staunchly held his own through 269 deliveries before bringing up his century with a four off Wagner, but scored only two more runs off his next 33 balls before his dismissal.

Kane Williamson Cricket New Zealand vs Pakistan, 1st Test
Get the latest updates on IPL Auction 2023 and check out  IPL 2023 and Live Cricket Score. Like us on Facebook or follow us on Twitter for more sports updates. You can also download the NDTV Cricket app for Android or iOS.