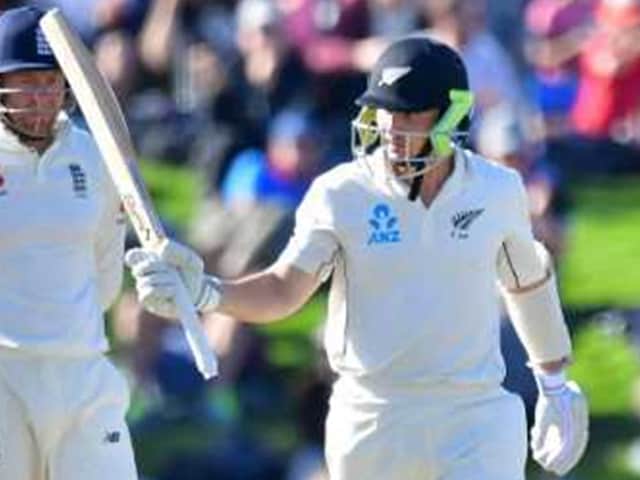 BJ Watling and Colin de Grandhomme hauled New Zealand back into the second Test on Saturday, cutting England's advantage back to 115 runs with four wickets in hand at stumps on day two in Christchurch. When bad light stopped play seven overs early, New Zealand had recovered from 36 for five to be 192 for six in reply to England's 307. Watling was unbeaten on 77 after sharing a 142-run stand with de Grandhomme which was broken late in the day by England's man of the moment Stuart Broad. The 31-year-old Broad, who had de Grandhomme caught behind for 72, wound back the clock to finish the day with four for 38.

"It was probably the best rhythm I've felt for a couple of years running in today. I was rubbish in Australia," he said, adding that England had the upper hand despite New Zealand's fightback.

"Watling didn't really give us a chance. They played exceptionally well but from our points of view we held them well enough to still be ahead in this game."

It was Watling's 14th Test half-century and de Grandhomme's second highest score as they passed New Zealand's previous sixth-wicket partnership record against England of 141, set by Martin Crowe and Adam Parore 24 years ago.

De Grandhomme believed New Zealand still had a chance of getting a first innings lead despite the new ball being only five overs away.

"Obviously we're behind the eight ball, but hopefully tomorrow we can come hard and get close or past the score."

In a match of fluctuating fortunes, New Zealand's recovery followed England's own revival from 164 for seven to be all out for 307.

After months of misery on the road, England felt their luck had turned with wicketkeeper-batsman Jonny Bairstow's fifth Test century before he was out for 101.

Broad and James Anderson then routed the New Zealand top order to have the Black Caps in serious trouble before de Grandhomme joined Watling to steady their innings.

De Grandhomme took an aggressive approach to bring up his 50 off 87 deliveries but then took a back seat as Watling opened up in the final session.

Watling, on 40 at tea, was troubled by Mark Wood after the resumption before taking out his frustration on spinner Jack Leach to reach his 50 with a huge six over mid-wicket.

From there, he scored freely in an innings which also included 10 fours.

England need to win to level the series while New Zealand require a draw to ensure a rare second home series win over England.

Broad, who felt before the first Test in Auckland that he was in danger of being dropped as a new-ball bowler, justified the faith in him when he had Tom Latham caught behind with the ninth ball of the New Zealand innings.

It was to be the first of four catches by Bairstow who was also instrumental in removing Jeet Raval (five) and Kane Williamson (22) to give Anderson figures of two for 43, and de Grandhomme.

England had resumed the second day at 290 for eight and added 17 runs, seven from byes, in 41 balls.

Leach added six to be out for 16 while Bairstow moved from 97 to 101 before he was the last man dismissed.

Comments
Topics mentioned in this article
New Zealand Cricket Team England Cricket Team BJ Watling Colin de Grandhomme Stuart Broad Cricket
Get the latest Cricket news, check out the India cricket schedule, Cricket live score . Like us on Facebook or follow us on Twitter for more sports updates. You can also download the NDTV Cricket app for Android or iOS.