NZ vs BAN: In New Zealand's first ODI in 12 months, Trent Boult took four for 27 while Martin Guptill blazed away for 38 off 19 deliveries. 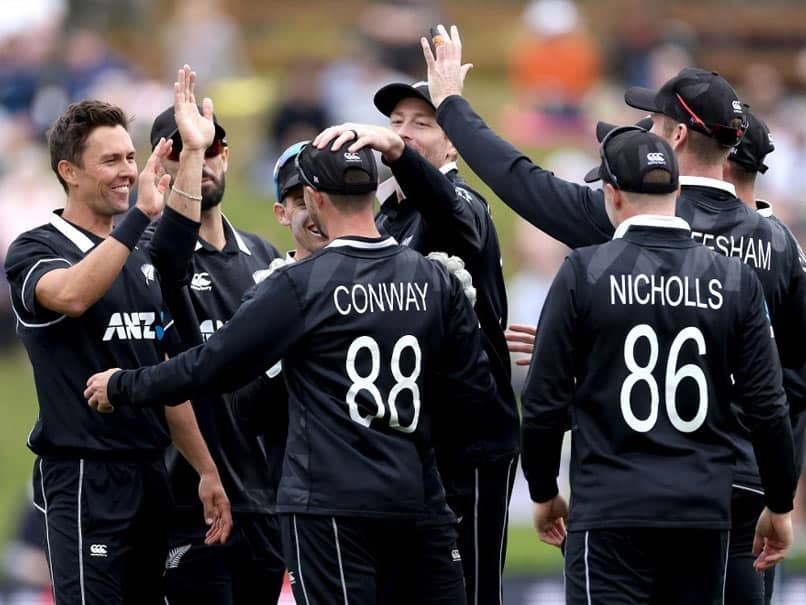 With Trent Boult moving the ball both ways, New Zealand dismissed Bangladesh for a mediocre 131.© AFP

New Zealand captain Tom Latham called it "awesome" as star performers Trent Boult and Martin Guptill powered the Black Caps to an emphatic eight wicket win over Bangladesh in the opening one-day international in Dunedin on Saturday. With swing king Boult moving the ball both ways, New Zealand dismissed Bangladesh for a mediocre 131 and a blistering cameo with the bat by Guptill saw them cut down the target with more than 28 overs to spare. In New Zealand's first ODI in 12 months, Boult took four for 27 while Guptill blazed away for 38 off 19 deliveries.

"We haven't played for a while and it was about setting the tone, winning the toss and bowling and I thought Trent and Matt Henry did that great, and for us to chase 130 in 20-odd overs was awesome" captain Tom Latham said.

"And we know how destructive he (Guptill) can be when he plays like that, and to break the back of the chase was awesome and for the guys to finish it off then was a pretty clinical performance all round."

All but two of Guptill's 38 runs came from boundaries with four sixes and three fours before Taskin Ahmed found a faint edge and wicketkeeper Mushfiqur Rahim completed the dismissal.

Devon Conway in his maiden ODI was the other wicket to fall for 27 while opener Henry Nicholls was left 49 not out.

Nicholls was denied his 12th half century when another debutant Will Young (11 not out) brought up the winning runs with a boundary.

When Bangladesh lost the toss and were sent into bat opener and skipper Tamim Iqbal immediately looked to dominate with a six off Boult's third ball and a four off the second over from Matt Henry.

But on a ground where the average winning score is in excess of 300, the tourists were soon in trouble when Boult took two wickets in his third over.

He started with the dismissal of Iqbal, trapping him lbw with a straight delivery as the Bangladesh skipper waited for the ball to swing.

When the tourists were all out in the 42nd over, Iqbal said he knew 131 was nowhere near enough.

"There were too many soft dismissals. No doubt, they bowled extremely well but we played some loose shots. We have ourselves to blame," he said.

Bangladesh came to New Zealand fresh from a 3-0 series win over the West Indies but while six Bangladesh batsmen reached double figures they did not persevere with Mahmadullah's 27 from 54 deliveries the top score.

Mushfiqur Rahim with 23 was the only other batsman to get past 20.

In addition to Boult's four-wicket haul, Jimmy Neesham took two for 27 and Mitchell Santner finished with two for 23.

Neesham was also central to a third wicket when he spilled a return chance from Mahmudullah only for the ball to deflect on to the stumps and run-out non-striker Mohammad Mithun who was backing up too far.

The second match in the three-match series is in Christchurch on Tuesday.

Martin Guptill New Zealand vs Bangladesh, 1st ODI Cricket
Get the latest updates on IPL 2021, IPL Points Table , IPL Schedule 2021 , live score . Like us on Facebook or follow us on Twitter for more sports updates. You can also download the NDTV Cricket app for Android or iOS.