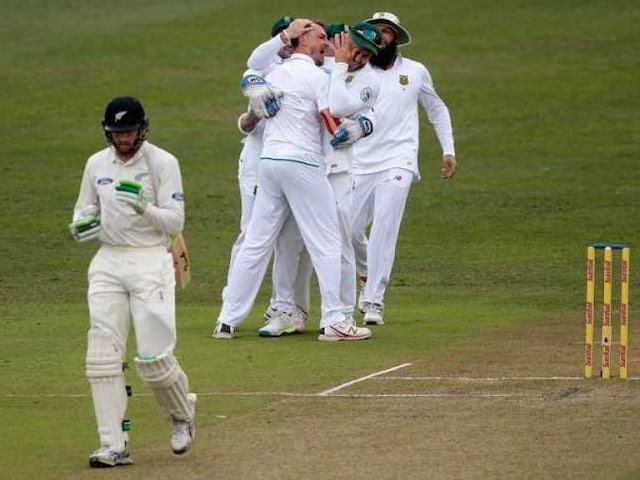 After eight months of frustration, South African fast bowler Dale Steyn left the field at Kingsmead on Saturday with "a smile on his face", according to bowling coach Charl Langeveldt.

Unfortunately for Steyn and his fellow bowlers, they walked off at lunchtime and didn't return after reducing New Zealand to 15 for two on the second day of the first Test.

Rain prevented any more play and meant South Africa could not take further advantage of favourable bowling conditions as they sought to defend a first innings total of 263.

Steyn, playing in his first Test match since December, bowled a mesmerising spell of two for three in six overs, dismissing both New Zealand opening batsmen.

At 33, questions had been asked Steyn's ability to come back with anything like the impact that made him the long-time number one-ranked Test bowler.

He has dropped to number three after playing in only two out of South Africa's previous eight Tests, failing to complete either because of groin and shoulder injuries.

But on a greenish pitch under a heavily overcast sky, it was though a rewind button had been switched as Steyn bowled with immaculate control, backed up by Vernon Philander, also coming back from injury.

Langeveldt said he was delighted to have the pair back, bringing their skill and experience to a South African team that has slumped from number one to number seven in the Test team rankings.

Steyn bowling "within himself"

If there was a question that Steyn left unanswered in his brief spell, it was whether he could still bowl at speeds well in excess of 140kmh, but Langeveldt shrugged that off.

"Dale likes to bowl within himself with the new ball," said Langeveldt. "He prefers to have control up front. You will see that he bowls faster in his second and third spells."

Steyn had Tom Latham caught at first slip by Hashim Amla for four off the second ball of his fourth over.

He followed up in his next over with a full in-swinger which trapped Martin Guptill leg before wicket for seven.

Latham added only one run after being dropped off Philander.

Guptill survived an appeal for leg before wicket off Steyn's fourth ball of the innings when he was on two.

Umpire Richard Illingworth turned down the appeal and South Africa decided not to seek a review. Replays showed the ball was clipping leg stump in the 'umpire's call' area so a review would have failed.

Although Steyn had the better figures, Philander also looked close to his best form after missing South Africa's most recent seven Test matches because of an ankle injury. In the last over before lunch he twice beat Ross Taylor with balls that swung sharply away from the bat.

Tim Southee struck with the eighth ball of the day when he bowled Steyn before South Africa had added to their overnight total of 236 for eight.

Kagiso Rabada and Dane Piedt added 27 runs for the last wicket despite New Zealand taking the second new ball, which enabled Southee and Trent Boult to gain extravagant movement in the overcast conditions.

Rabada, who was dropped by Southee at third slip off Boult when he had 16, battled his way to an unbeaten 32 before Piedt was last man out, caught behind off Boult for nine.

Boult finished with figures of three for 52.

Comments
Topics mentioned in this article
New Zealand Cricket Team South Africa Cricket Team Dale Steyn Kane Williamson Trent Boult Kingsmead, Durban Cricket
Get the latest updates on IPL 2020, check out the IPL Schedule for 2020 and Indian Premier League (IPL) Cricket live score . Like us on Facebook or follow us on Twitter for more sports updates. You can also download the NDTV Cricket app for Android or iOS.