The hosts, lying at the bottom of the Test table in 10th place, piled up 501 in reply to New Zealand's 469 before being all out soon after lunch on the fourth day with a lead of 32 runs. 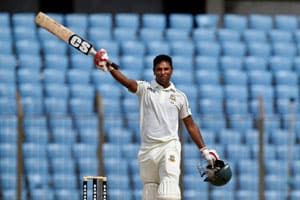 
The hosts, lying at the bottom of the Test table in 10th place, piled up 501 in reply to New Zealand's 469 before being all out soon after lunch on the fourth day with a lead of 32 runs.

The Black Caps, ranked eighth above only Zimbabwe and Bangladesh, helped themselves to 117-1 in their second innings before heavy rain forced play to be called off at the Zahur Ahmed Chowdhury stadium.

Peter Fulton was unbeaten on 44 and Kane Williamson was on 28 with the Black Caps going into the final day's play on Sunday with a lead of 85 runs and nine wickets in hand.

Hamish Rutherford was dismissed for 32, but both sides face a tough task to force a result on the slow, newly-laid pitch that has offered no assistance to either seam or spin bowlers.

Gazi, a 22-year-old off-spinner whose highest score in six previous Tests was 32, remained unbeaten on 101 after coming in to bat at number eight. He hit 10 boundaries and three sixes.

Gazi said he was inspired by New Zealand wicket-keeper Bradley-John Watling, who also batted at number eight in the first innings and scored 103.

"I was very motivated by Watling's innings," he said. "We were telling each other in the dressing room that if he can do this, why can't I?

"There is no help for the bowlers on this wicket. If a batsman plays with a straight bat, it is tough to get him out."

Gazi and Robiul Islam exposed the limitations of the Black Caps' attack by adding 105 runs for ninth-wicket to help Bangladesh grab the first-innings lead.

Robiul hit a career-best 33 before he was dismissed soon after lunch, caught off seamer Doug Bracewell, who returned as New Zealand's most successful bowler with three wickets for 96 runs.

"I am grateful to Robiul because he gave me good support," said Gazi. "At one stage, he came to me and said that he is holding his end up so that I can get the hundred.

"It is obviously a good feeling to score a century. I was excited even after getting to 50 because I had never scored one at the international level. So the hundred was just very special."

Frontline spinners Bruce Martin and Ish Sodhi both conceded over 100 runs, while part-timer Williamson went for 1-83 in 27 overs.

Bangladesh added seven runs to their overnight score of 380-7 when they lost Abdur Razzak for seven, leg-before to seamer Trent Boult.

Bangladesh are looking for their first Test win against New Zealand, having lost eight and drawn one of their nine matches against the Black Caps.

The second Test will be played in Dhaka from October 21 to 25, followed by three one-day internationals and one Twenty20 match.

Comments
Topics mentioned in this article
Cricket Kevin Pietersen Yuvraj Singh Nasser Hussain Bangladesh Cricket Team Pakistan Cricket Team New Zealand Cricket Team
Get the latest updates on ICC T20 Worldcup 2022 and CWG 2022 check out the Schedule, Live Score and Medals Tally. Like us on Facebook or follow us on Twitter for more sports updates. You can also download the NDTV Cricket app for Android or iOS.