New Zealand Fast Bowler Neil Wagner clocked 160 kmph during the second day of the first Test against Sri Lanka at University Oval in Dunedin but he was soon floored by a technical glitch in the speed gun. 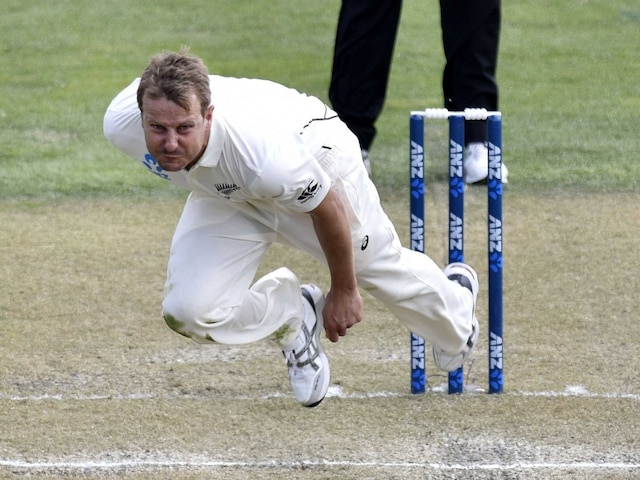 Neil Wagner clocked 160 kmph during the second day of the first Test against Sri Lanka in Dunedin but the speed was a result of a technical glitch.© AFP

Australia's Mitchell Starc clocked 160.4 kmph during the third day of the second Test against New Zealand in November 2015 at the WACA in Perth. The delivery, which was bowled to Ross Taylor, was termed as the fastest recorded delivery. A couple of weeks later, Kiwi pace bowler Neil Wagner clocked 160 kmph during the Test match against Sri Lanka in University Oval, Dunedin. (Mitchell Starc Clocks 160.4 kmph Against New Zealand in Perth)

The incident took place in Wagner's second over. Bowling the fourth ball to Dinesh Chandimal, Wagner speared a yorker just outside off and the speed gun showed the pace to be 160 kmph. This caused a flutter in cricketing circles as Wagner was a bowler who usually bowled in the low 130-kmph range.

However, the pace registration of the speed gun was due to a technical glitch. According to a report on stuff.co.nz, a member of Sky Sport's Production team said that a low-flying seagull was probably to blame for the inaccurate reading from one of the two speed guns at the venue. The second bizarre possibility was a laser beam at the ground.

Wagner ran in hard and finished up with figures of 13-2-53-2 as Sri Lanka ended the day on 197/4 in response to New Zealand's 431 all out. Although it was a day of hard-fought cricket, Wagner's entry into the supposed 160-club set the cricketing world abuzz. It was another thing that he was floored by a bird.

Comments
Topics mentioned in this article
Sri Lanka Cricket Team New Zealand Cricket Team Neil Wagner Dinesh Chandimal Cricket
Get the latest updates on IPL 2020, check out the IPL Schedule for 2020 and Indian Premier League (IPL) Cricket live score . Like us on Facebook or follow us on Twitter for more sports updates. You can also download the NDTV Cricket app for Android or iOS.