New Zealand defeated Zimbabwe by 90 runs in the first one-day international on Friday as poor batting by the tourists undermined a creditable bowling effort. 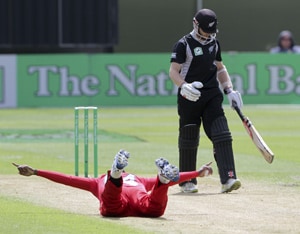 New Zealand defeated Zimbabwe by 90 runs in the first one-day international on Friday as poor batting by the tourists undermined a creditable bowling effort.

Zimbabwe, reeling from a humiliating innings-and-301-run defeat in a one-off Test in Napier last week, were set an achievable target of 249 after winning the toss and sending New Zealand in to bat on a seaming wicket.

But the hard work by Zimbabwe paceman Shingi Masakadza, who took four for 46, was undone by a weak batting display in which captain Brendan Taylor's 58 off 68 balls was the sole bright spot.

"We just weren't good enough today," Taylor said. "We'll go back to the drawing board with the batting and a few areas with the ball, but we we just outplayed by a better side."

New Zealand were far from convincing as Zimbabwe took two wickets in the opening two overs and were eventually bowled out in the 48th over.

Kane Williamson (35), Nathan McCullum (30) and Andrew Ellis (33) all made starts but could not dig in on a green-tinged pitch that offered plenty of movement.

Guptill was the only batman who managed to break the shackles and his 88-run partnership with Williamson proved crucial in steadying the New Zealand innings.

He brought up a half century off 44 balls, including seven fours, but fell when a lapse in concentration saw him clean bowled by Elton Chigumbura.

Unlike the Napier Test, Zimbabwe maintained the pressure and were rewarded when a diving Dean Brownlie was run out for 19 after Regis Chakabva hit the stumps from side-on with a sharp piece of fielding, leaving the hosts on 166-6.

Masakadza claimed another three scalps as the hosts' final four wickets fell for 25 runs, with Andrew Ellis (33) playing onto his stumps, Nathan McCullum clean bowled and Tim Southee (3) out lbw.

Zimbabwe suffered a horror start to be 15-3 in the sixth over, with openers Stuart Matsikenyeri (1) and Hamilton Masakadza (7) both out cheaply.

Taylor, who described the Test loss as "a big smack in the face", gave Zimbabwe some hope in the middle order, forging partnerships of 52 and 30 with Tatenda Taibu and Malcolm Waller.

He eventually fell trying to lift the run rate against a miserly New Zealand attack, smashing a six off Nicol but offering Andrew Ellis an easy catch at long-off when he went for another in the next ball.

Taylor's departure effectively ended Zimbabwe's resistance, with only tailender Ray Price's 26, the second highest score of the innings, adding some respectability to the final result.

Comments
Topics mentioned in this article
Cricket Shingirai Masakadza Brendan Taylor Zimbabwe Cricket Team Martin Guptill Pakistan Cricket Team New Zealand Cricket Team
Get the latest updates on SA vs IND 2021-22, check out the Schedule and Live Score . Like us on Facebook or follow us on Twitter for more sports updates. You can also download the NDTV Cricket app for Android or iOS.