One of the most important amendments to the playing conditions pertain to changing the condition of the ball, which will be applicable in all three formats of the game. 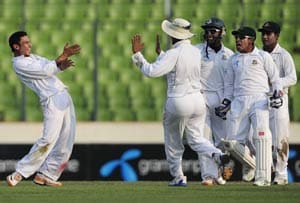 The new playing conditions for all three formats of international cricket -- including the contentious Decision Review System and stricter penalties for ball-tampering -- came into effect with the series between Bangladesh and New Zealand which started here on Wednesday.

Bangladesh and New Zealand will play two Tests, three ODIS and a one off Twenty20 in a series which will conclude on November 6.

One of the most important amendments to the playing conditions pertain to changing the condition of the ball, which will be applicable in all three formats of the game.

If there is a further incident of the condition of the ball being changed, a five-run penalty will be awarded, the ball changed again and the captain will be held responsible and reported.

Apart from this, the Decision Review System is being used on a six-month trial.

Besides in the ODIs, clause 5.1.3 has been added to Law 5 that deals with the ball.

"The new clause reads: 5.1.3: 'In a match reduced to 25 overs or less per side before the first innings commences, each team shall have only one new ball for its Innings'."

Comments
Topics mentioned in this article
Cricket Bangladesh Cricket Team Pakistan Cricket Team New Zealand Cricket Team
Get the latest updates on ICC T20 Worldcup 2022 and CWG 2022 check out the Schedule, Live Score and Medals Tally. Like us on Facebook or follow us on Twitter for more sports updates. You can also download the NDTV Cricket app for Android or iOS.