With Bollywood actor Shah Rukh Khan as the enthusiastic face of the tournament, this initiative aims to promote grass-root skills. 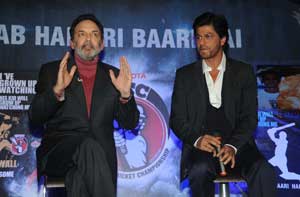 NDTV has launched a revolutionary concept to revive university cricket in India, on Thursday - Toyota University Cricket Championship. Eight teams from four zones will play in a T20 format for the title of being the best university in cricket. The aim is also to find future champions of the sport and nurture their talent.

While university cricket drew huge crowds in the 1960s and 70s, it has seen a gradual fall in interest over the last two decades. NDTV, in partnership with the Human Resource Development ministry, seeks to bring back the cheers, the talent and theÂ  adrenaline of cricket at this level .

With Bollywood actor Shah Rukh Khan as the enthusiastic face of the tournament, this initiative also aims at promoting grass-root talent.

Speaking at the launch, NDTV Executive Co-Chairperson Dr Prannoy Roy said that this tournament will be world-class. "Great camera-work, excellent graphics and all other factors will make this tournament truly world-class," he said.

Shah Rukh too said that he was pleased with the initiative and that he was glad to be associated with it. "Whatever I am today, it is because of what I learnt at that level - school and universities. Nothing better than this. One of the finest initiatives from NDTV, apart from Marks for Sports," he said, adding, "Sports can be a salaried job. I would like to be a brand ambassador for any sport."

The vital support from the Board of Control for Cricket in India too was acknowledged at the event hosted at the Taj Lands End. BCCI chief N Srinivasan had earlier praised the concept. "BCCI has always encouraged university cricket. I am very glad NDTV is going to sponsor and support it. For people to see university cricket which they don't now, is very important."

Others like Minister of State Shashi Tharoor and HRD Minister Pallam Raju also spoke on the importance of such a tournament. "I hope this (University Cricket Championship) spreads to other sports as well," said Mr Tharoor.

UCC will be an extension of the 77-year-old Rohinton Baria Tournament. All matches will be telecast live on a sports channel and NDTV will also do extensive programming around it. It will start next month.

Comments
Topics mentioned in this article
Cricket Lalit Modi Sourav Ganguly Shah Rukh Khan
Get the latest updates on ICC T20 Worldcup 2022 and CWG 2022 check out the Schedule, Live Score and Medals Tally. Like us on Facebook or follow us on Twitter for more sports updates. You can also download the NDTV Cricket app for Android or iOS.