N. Srinivasan: We are not the big bullies of world cricket 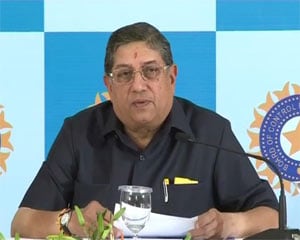 Indian cricket board president Narayanaswami Srinivasan said on Thursday that the Board of Control for Cricket in India (BCCI) is not a bully in the cricket world and all it wants is a fair deal for Indian cricket.

Srinivasan denied rumours that the BCCI, upset with the appointment of former International Cricket Council (ICC) chief executive Haroon Lorgat as the CEO of Cricket South Africa (CSA), has put on hold the scheduled series in South Africa.

Srinivasan said he would meet the CSA president Friday to discuss the issues regarding the tour.

"We need more inbound tours so we invited the West Indies. There is no attempt to bully the cricket world. All I want is a fair deal for the BCCI. As far as the tour of South Africa is concerned, we will take a call after our discussion with CSA (on Friday)," Srinivasan said.

Srinivasan, who earlier this week was allowed by the Supreme Court to take charge of the BCCI, said the board was not giving a farewell gift to Tendulkar by organising a Test series in India so he could play his 200th Test.

"Sachin is such a great player and no one can talk of a farewell gift to him. He is possibly the greatest player India has ever produced. I am a great admirer of Sachin's batting and have followed him since he started playing international cricket," Srinivasan told a news channel in an interview.

"If we respect Sachin's achievements, we should not be talking of him in these terms," Srinivasan said.

Asked about the controversial Decision Review System (DRS), Srinivasan said that the board's stand on the decision making system was vindicated after some dubious calls during the Ashes series.

"The technology is still not quite there and there are some fundamental issues with the DRS, so for the time there will be no rethink."

Srinivasan refused to comment on the issues of spot-fixing or the involvement of his son-in-law Gurunath Meiyappan in the betting scandal. The board president said the BCCI is not a cosy club and is a well managed organisation.

"BCCI is not a cosy club, people are responsible, cricket is managed well, new stadiums have come up, we have given pensions and one-time benefits to old cricketers, zonal academies have been set up and infrastructure has been developed."

"Do not brush aside all the achievements of the BCCI. The system works, our bench strength is good and it seems according to you, you do not need any administrators," said Srinivsan.

Comments
Topics mentioned in this article
Cricket Sourav Ganguly BCCI
Get the latest updates on ICC T20 Worldcup 2022 and CWG 2022 check out the Schedule, Live Score and Medals Tally. Like us on Facebook or follow us on Twitter for more sports updates. You can also download the NDTV Cricket app for Android or iOS.