Kuldeep Yadav said that while KL Rahul and Rishabh Pant have been performing well behind the stumps, the experience that MS Dhoni brings is being missed in the team. 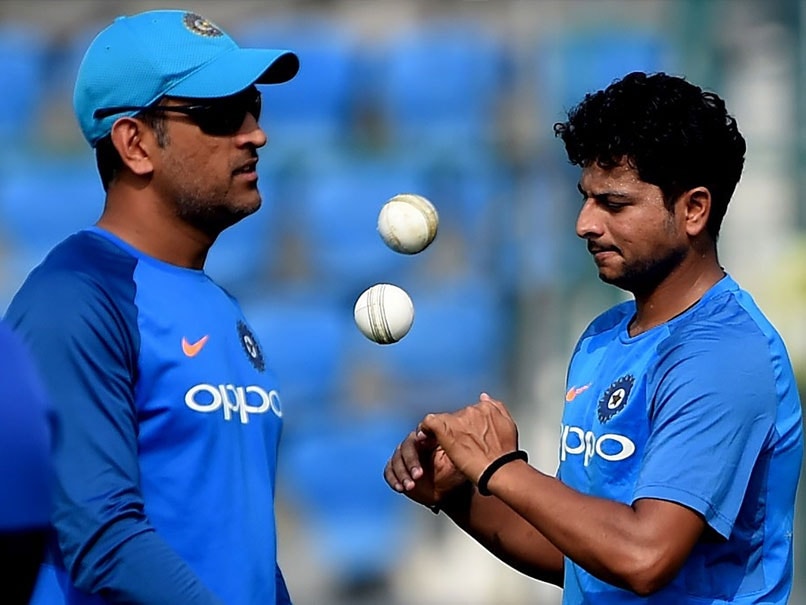 Kuldeep Yadav highlighted the position MS Dhoni has in the Indian set-up.© AFP

India spinner Kuldeep Yadav has once again highlighted the position former skipper MS Dhoni has in the Indian set-up. The bowler has said that while KL Rahul and Rishabh Pant have been performing well behind the stumps, the experience that Dhoni brings is being missed in the team. "Mahi bhai obviously brings a lot of experience with him and he has given the Indian team a lot. So when a player like that is not playing of course you miss him. They (Rahul and Pant) are young and are doing well. Both are keeping well so it has not made too much of a difference, but yes, you do miss his presence," Kuldeep told select reporters on Thursday on the sidelines of the Times of India Sports Awards.

While Pant was pushed as Dhoni's replacement post the 2019 World Cup, the 22-year-old's inconsistency with the bat led to Rahul taking his place behind the stumps.

Consequently, Rahul's supreme form with the bat and ability to play in a variety of positions across the order seems to have led to him making the position his own.

"They are catching well and batting pretty well. I have not felt too much of a difference in that way. Every player has their good days and bad days and it's important to back them when they have bad ones. It's not that you play for one day, there are lots of days in a year for cricket," he said.

Kuldeep felt that from a bowler's point of view, adjusting to Rahul or Pant from Dhoni has not been too much of a leap.

Kuldeep and Yuzvendra Chahal's rise as a deadly wrist spin duo was a theme for India going into the 2019 World Cup.

Since then however, the return of Ravindra Jadeja to the limited-overs setup has led to the pair rarely getting to play together in a match.

Kuldeep said that it's all down to the team management when asked if he expects to play once again with Chahal at the T20 World Cup later in the year.

"Our team is very strong and we will make as much effort as possible to put up a strong performance. As far as wrist spin goes, it depends upon what the management decides. If there are two players who are very good at forming batting or bowling partnerships, it is always great for the team. So it will be good if we play together," he said.

"It's all on the team combination. Jadeja has been playing very well as a batsman, bowler and fielder. Because of him the combination has become stronger. He gives a lot of depth to the batting. Whenever Chahal and I get chances we try to perform to our best."

Head coach Ravi Shastri had touted Kuldeep to be India' primary Test spinner away from home after the 25-year-old picked up five wickets in an innings in Sydney against Australia.

However, he was not included in the recent two-match Test series against New Zealand that India lost 2-0. Kuldeep however said that it probably was the right decision to make considering the pacer-friendly conditions on offer during the two Tests in Wellington and Christchurch.

"The New Zealand track is very different and you saw that there was nothing for spinners in the Test matches. It was not a long series either so those could have been the reasons," he said.

"There was communication with the team management about this. They do back me a lot and the support staff talks openly about any flaws I may have to improve upon. The conditions were different there so I feel the right decision was made."

Kuldeep is expected to feature in the Indian team that face South Africa in a three-match ODI series starting on March 12 but the Indian Premier League that starts shortly after the end of the series is touted as the real litmus test for him as far as selection in the squad for the 2020 World T20 is concerned.

"IPL is a platform that forces you to be alert all the time," said Kuldeep. "For now I am fully ready for the tournament. It's very important with the T20 format and the intensity is always high in this format. So I am fully focussed on it. Any player likes to keep playing. IPL is a platform where if you play regularly you perform well. Even when I'm not playing I keep practicing so that I am ready when I get a chance."

Kuldeep Yadav Cricket
Get the latest updates on SA vs IND 2021-22, check out the Schedule and Live Score . Like us on Facebook or follow us on Twitter for more sports updates. You can also download the NDTV Cricket app for Android or iOS.