The video shot in the -3 degrees temperature, shows MS Dhoni enjoying the snowfall with his family members, including daughter Ziva and wife Sakshi. 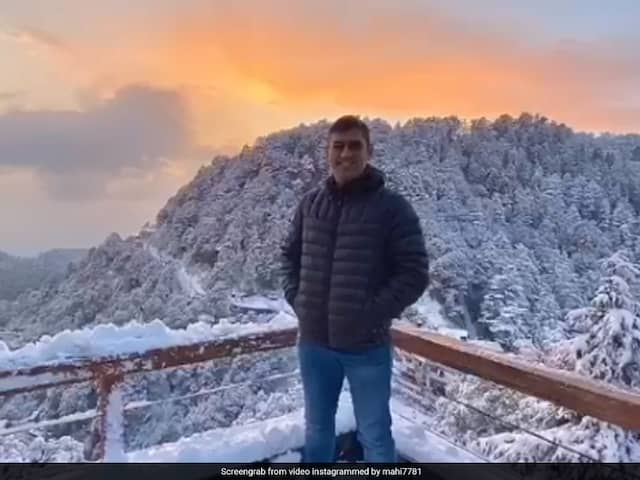 MS Dhoni enjoyed the snowfall with his family members in Mussoorie.© Instagram

MS Dhoni, despite being out of action since July 2019, continues to be one of the most talked about players in the international circuit. MS Dhoni on Wednesday shared a over 4-minute long video on Instagram where he can be seen "experiencing first snowfall of 2020" in Mussoorie -- popularly known as "Queen of the hills". The video, shot in the -3 degrees temperature, shows the veteran wicket-keeper enjoying the snowfall with his family members, including daughter Ziva and wife Sakshi. The video shows MS Dhoni and Ziva playing with the snow-balls by throwing it on each other. "-3 degrees. Waking up to flurries descending .........experiencing first snowfall of 2020 in "Queen of the hills" an amazing experience #rockvilla," Dhoni captioned the video on Instagram. The video also shows them making a snowman.

Waking up to flurries descending .........experiencing first snowfall of 2020 in "Queen of the hills" an amazing experience #rockvilla

On Sunday, Dhoni had shared an adorable video of Ziva playing a guitar and singing a song. "Snow brings the best out of her", Dhoni had captioned the video.

The veteran wicketkeeper-batsman is on a sabbatical from cricket since India's World Cup exit on July 9, 2019, and missed bilateral series against South Africa, Bangladesh and the West Indies.

He was not included in the squads for T20 International series against Sri Lanka and the One-day International rubber with Australia.

In his absence, Team India have entrusted their faith in young Rishabh Pant to fill in his shoes, especially in the limited-overs formats but it hasn't worked out pretty well as he has has blown hot and cold so far.

Dhoni is expected to return to action in the Indian Premier League (IPL) 2020 where he leads the three-time champions Chennai Super Kings.

Some experts believe that Dhoni's future with Team India will largely depend on how he fares in the IPL, which as per some reports is scheduled to start on March 29 and continue till May 24.