India cricketer Mohammed Shami on Thursday was cleared of match fixing allegations by the Indian cricket board. 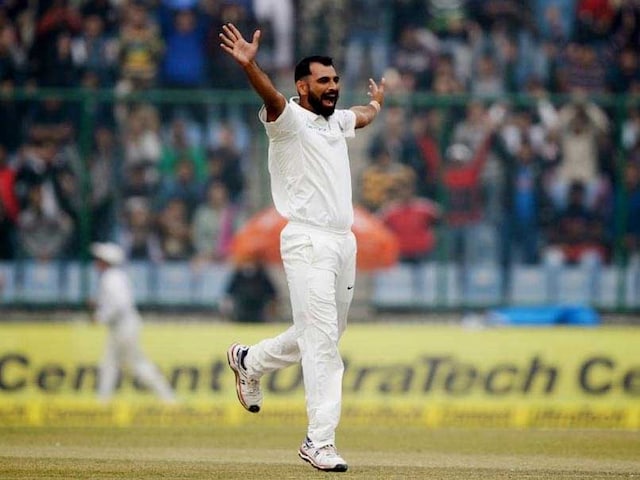 The Board of Control for Cricket in India (BCCI) on Thursday cleared India fast bowler Mohammed Shami's central contract after its Anti-Corruption Unit (ACU) exonerated him of corruption charges levelled by his wife Hasin Jahan. "The Hon'ble Supreme Court of India appointed Committee of Administrators (CoA) had requested Mr Neeraj Kumar, former Police Commissioner of Delhi and Head of BCCI Anti-Corruption Unit, to investigate the allegations against Mohd. Shami in so far as they pertain to the provisions of the BCCI Anti-Corruption Code," BCCI stated in a media release.

Shami has been given a Grade 'B' annual contract, which will make him richer by Rs 3 crore. He will also be free to play in the Indian Premier League, starting April 7, for his franchise the Delhi Daredevils.

Following the green light given by BCCI, a relieved Shami spoke exclusively to NDTV and said that he always had full faith in the Indian cricket board.

"I always had full faith in the BCCI. I was waiting for this verdict and I'm happy they investigated the matter properly and the truth has now come out. I started training from last week and I am trying to prepare mentally after these hardships," Shami told NDTV.

"I have done my best to come out clean from this matter. I hope to now return to my old routine, get my life back and just look after the future of my daughter.

"As far as cricket goes, it's a big relief for me. Hasin (Shami's wife) has already said that she does not want to reconcile so only way to sort out this matter now is legally," the Indian cricketer added.

The BCCI had decided to withhold Shami's contract after Jahan made a series of allegations, including adultery and domestic violence, and lodged a police complaint against him. Shami has denied all the allegations.

The Committee of Administrators (CoA) specifically asked its ACU chief Neeraj Kumar to investigate the charges that the bowler accepted money from one Mohammed Bhai through a Pakistani woman named Alishba.

"Mr Neeraj Kumar has submitted his confidential report to the CoA. Based on the conclusions in the said report, the CoA is of the view that no further actions/proceedings under the BCCI anti-corruption code are warranted in the matter.

"For this reason, the BCCI shall proceed with offering a Grade B' annual retainership contract to Mohd. Shami," the release further stated.

BCCI acting president CK Khanna told PTI :"This is a very good news for Shami and for Indian cricket. The charges of corruption against him looked too far-fetched. He has been a committed player for India. The BCCI is happy that he has come clean after a thorough investigation by its Anti-Corruption Unit (ACU). It is only fair that he can now earn his livelihood as a professional cricketer and should be back in the field for the upcoming IPL."

IPL chairman Rajeev Shukla had already clarified that Shami would be allowed to play the moment he gets a clean-chit from the ACU.

Delhi Daredevils CEO Hemant Dua was also happy with the development as Shami is an integral part of their bowling unit.

"I have just received the confirmation from the BCCI that Shami has been absolved of all charges related to corruption allegations. It's a welcome news for the franchise and we are happy to have him back. We expect him to join the camp from the very first day," CEO Dua said.

Comments
Topics mentioned in this article
Mohammed Shami Cricket
Get the latest Cricket news, check out the India cricket schedule, Cricket live score . Like us on Facebook or follow us on Twitter for more sports updates. You can also download the NDTV Cricket app for Android or iOS.