Hafeez, Pakistan's Twenty20 captain, has scored just 102 in his last five Tests and will miss the two-Test series which begins in Abu Dhabi on October 14. 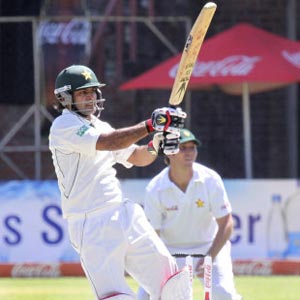 The series starts in Abu Dhabi on October 14, with the second Test in Dubai from October 23.

The 32-year-old, Pakistan's Twenty20 captain, has scored just 102 in his last five Tests. He managed 43 in a 3-0 Test defeat in South Africa in February and scored only 59 in the two-Test series against Zimbabwe last month.

Three players will be added to the squad after a three-day practice match between Pakistan 'A' and South Africa in Sharjah starting from October 8.

Pakistan and South Africa will also play five one-day and two Twenty20 internationals, for which squads will be named later, the Pakistan Cricket Board said in a statement.

Pakistan, who are without a chief selector, left out batsmen Asad Shafiq, Umar Akmal, Ahmed Shahzad and Shan Masood, but they still have a chance of making the larger squad, which so far only has one opener in Khurram Manzoor.

Paceman Mohammad Irfan, at 7ft 1in the tallest cricketer to play at international level, earned a Test recall despite an unimpressive two-match stint in South Africa earlier this year when he took just one wicket.

Umar Amin, 24, was also recalled after failing to impress in four Tests in 2010. He will lead Pakistan 'A' in the practice match.