Mitchell Santner played fighting knocks of 32 and 71 in New Zealand's resistance against the dominating Indian spinners and took five wickets, albeit in a losing cause 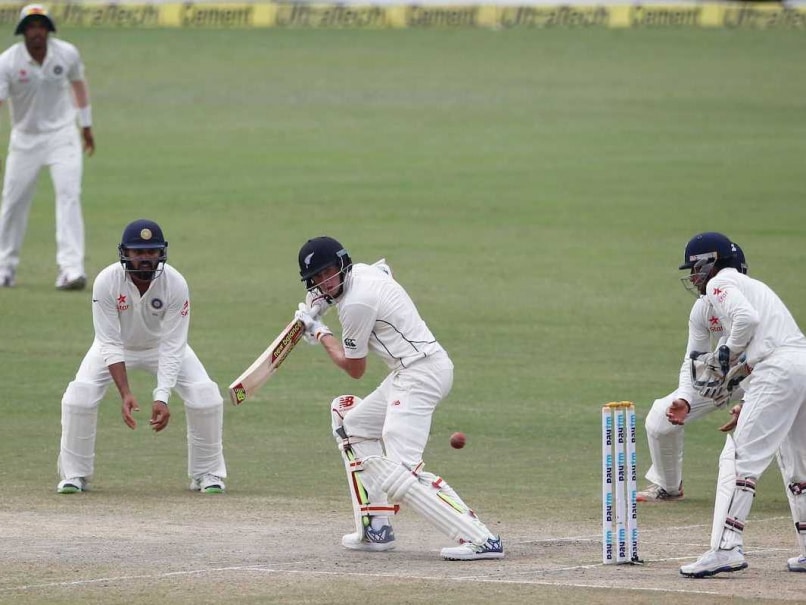 Mitchell Santner was New Zealand's standout performer with both bat and ball in the Kanpur Test. © BCCI

On his first visit to India, Mitchell Santner has made a good impression with his all-round performance and that's a huge positive for the New Zealand side from the Kanpur Test, captain Kane Williamson said.

Santner played fighting knocks of 32 and 71 (his maiden Test fifty) in Kiwis' resistance against the dominating Indian spinners and took five wickets, albeit in a losing cause.

"He played outstandingly well. It's his first time in this part of the world playing Test cricket and it was a great step in the right direction for his game. We all know he has got the talent with bat and ball and in the field, to apply himself like he did and bowl a number of overs and be successful was very good against good players of spin. It was a huge positive for us," said Williamson.

"He'll look forward to the next one and I'm sure he's learned a lot from this experience," added the young Kiwi captain at the post match press conference after New Zealand lost the first Test of the three-match series by 197 runs.

Not only Santner, he also lauded Luke Ronchi for his defying knocks in tough conditions. He scored 32 in the first innings and delayed India's victory march with his 80-run knock during the Kiwi chase.

"There were a lot of positives for us. Guys who hadn't played here before spent some valuable time in the middle and made some valuable contributions. Mitch Santner for one and Luke Ronchi another who certainly showed they had the skill-sets to perform well in these conditions.

"It is a challenge against a very good attack but they've got the skill-sets and it's being able to stick to it for a lot longer. That is the same with the ball for our young spin attack who are extremely talented. Being over here in these hot conditions, being able to remain focussed for a long period because you know if you put the ball in the area for long enough, you'll get your rewards. That's what the Indian team showed us," said Williamson.

The 26-year-old said a few bad phases in the match took the game away from them.

"On the scorecard it looks like a biggish defeat but there were a couple of moments that I would reflect on as where the game turned slightly more in their favour. The back end of our first innings with the bat and certainly when we bowled in the second innings there was probably a three-hour period where we didn't bowl very well and they got away from us. It's a combination of us not quite being at our best at certain times and they played very well," he said.

Williamson got out to Ashwin in both the innings. The first dismissal was of a ball which turned sharply from outside off and hit the gates and he spoke about that moment.

"They were pretty good balls, and he is a pretty good bowler. In these conditions there is certainly more spin so you do take those things into account. The nature of the conditions later on in the game you tend to get some good deliveries. It is part and parcel of playing here and we have to adapt our games to be better equipped going into the next match," he said.

The captain also said that Jeetan Patel, who has replaced injured Mark Craig in the squad for the remainder of the series, was not in the mix initially.

"For Jeetan to come into the squad after a period of time away from the team is a great opportunity for him. He's been a quality performer for a long period of time and it is that like-for-like swap as well. Jeets loves the game of cricket and loves playing for his country. It was perhaps unexpected. He has played a lot in England lately and almost considers himself a local in that part of the world but we know he's not and we are looking forward to having him back in the side.

"There are a number of other players from Wellington in the side who have spent a lot of time with Jeets and they're all very excited about it. He is looking forward to coming back and making an impact."

Williamson refused to reveal if opener Martin Guptill, who is struggling for runs, will be retained in the side for the Kolkata Test, beginning Friday.

"This game has just finished so we get to sit down and talk about whatever the team may be for the next one and what balance will go in with. In the first innings he got off to a good start and was perhaps a bit unfortunate in the second innings but he has certainly shown his class in the white ball format and we are backing him to show that in the red ball.

"He is working hard at his game and looking to improve. It isn't the easiest of places to play sometimes. We'll sit down in the next day or two and look at the side we might go with," he concluded.Â

Comments
Topics mentioned in this article
India Cricket Team New Zealand Cricket Team Kane Williamson Mitchell Josef Santner Ravichandran Ashwin Ravindra Jadeja Luke Ronchi Cricket
Get the latest updates on IPL 2020, check out the IPL Schedule for 2020 and Indian Premier League (IPL) Cricket live score . Like us on Facebook or follow us on Twitter for more sports updates. You can also download the NDTV Cricket app for Android or iOS.