Sri Lankan batsman Kumar Sangakkara left the ground fuming after being stranded on an unbeaten 199 during the first Test against Pakistan in Galle on Saturday. 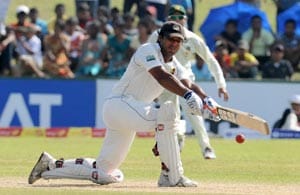 Sri Lankan batsman Kumar Sangakkara left the ground fuming after being stranded on an unbeaten 199 during the first Test against Pakistan in Galle on Saturday.

The left-hander missed out on his ninth double-century in Test cricket partly due to an error in the scoreboard on the ground which showed him on 194 when his score was actually on 193.

With last man Nuwan Pradeep at the other end, Sangakkara smashed Ajmal for a six and raised his arms in celebration believing he had reached the coveted double-century.

Team-mates, who saw the correct score on television, immediately signalled to Sankgakkara that he still needed one more run -- but to no avail.

Unable to get a run off the last ball of the over, Sangakkara could only watch from the non-striker's end as Pradeep was bowled by Mohammad Hafeez for no score in the next over.

Sangakkara, who was on 182 when the ninth wicket fell, scored all the 17 runs in the last-wicket stand, but found himself agonisingly short of the coveted mark.

Asked about his feelings while returning to the pavilion, the 34-year-old veteran of 109 Tests told reporters: "I don't think I can repeat here what I was thinking then.

"The ideal thing is to shut your eyes, take a deep breath and try and move on. There is nothing really one can do in the circumstances. It's all part of the game.

"But I would still like to remember this day in a positive way. Today is my father's birthday and making something close to 200 means I won't have to buy him a gift."

Sangakkara already has eight double hundreds in his 29 three-figure knocks in Test cricket.

His monumental nine-hour effort saw the hosts recover from 335-5 in the morning session to post 472 in their first innings on the second day.

Pakistan were tottering at 48 for five by stumps with seamer Nuwan Kulasekara and off-spinner Suraj Randiv both taking two wickets each off successive deliveries.

"The way our bowlers bowled made up for the disappointment of not getting a double," Sangakkara. "This is not an easy wicket to bat on and I am just happy in the position we are in."