Inexperienced Zimbabwe fast bowler Tendai Chatara took five for 61 as Pakistan were bowled out for 239 despite an unbeaten 79 by Pakistan captain Misbah-ul-Haq. 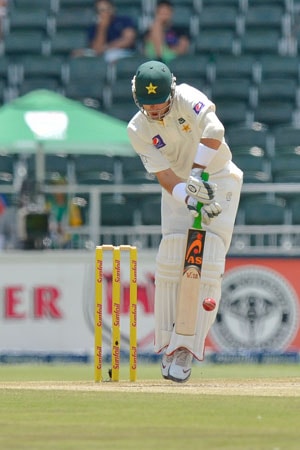 Pakistan's batting woes returned to haunt them as Zimbabwe pulled off a dramatic 24-run win to level the series on the fifth day of the second Test at the Harare Sports Club on Saturday.

Inexperienced Zimbabwe fast bowler Tendai Chatara took five for 61 as Pakistan were bowled out for 239 despite an unbeaten 79 by Pakistan captain Misbah-ul-Haq.

"The batting is a bit of a worry," said Misbah, looking ahead to Pakistan's next Test series, against world champions South Africa in the United Arab Emirates next month.

"All the batsmen have to learn from their mistakes. You can't win Test matches with twenties and thirties. You have to score big runs like Younis Khan did in the first Test."

Younis scored the only century of the series, an unbeaten 200 in the first Test, which Pakistan won by 221 runs at the same venue.

Misbah and opening batsman Khurram Manzoor both scored two half-centuries in the second Test, while Younis contributed 77 in the first innings. But the rest of the batting failed against the spirited Zimbabwean attack.

"Zimbabwe deserved the victory," said Misbah. "They played excellent cricket in the first Test as well. From the start they were positive and they kept us under pressure throughout the game."

Zimbabwe captain Brendan Taylor praised his team. "It takes a lot of character to come back from a big loss. Beating a world-class team is a wonderful feeling."

He said the bowlers had performed particularly well considering the team did not have a bowling coach.

Taylor said Zimbabwe's performance in the first Test, in which they were on top for much of the match, had shown the importance of not relaxing. "Even though we won the Test we learnt a lot from the way Pakistan went about playing."

It was only Zimbabwe's fifth win against a major Test nation - their third against Pakistan - and their most significant victory since they beat India in 2000/01.

Resuming at 158 for five, Pakistan suffered an early blow when Chatara trapped Adnan Akmal leg before wicket with only five runs added. Akmal, who made 20, went back to a ball which angled in towards his stumps.

Abdur Rehman scored 16 in a seventh wicket partnership of 34 with Misbah, who was content to continue to bat watchfully, as he had done on the fourth afternoon, before Rehman was caught behind off Tinashe Panyangara.

Chatara returned to the attack and immediately claimed the wicket of Saeed Ajmal in almost identical fashion to the way he dismissed Akmal, with the batsmen going back to a ball which cut back sharply and hit him on the pads.

Misbah faced 161 balls in reaching 58 at lunch. He stepped up the pace after the interval, keeping the strike with singles in the first two overs from Chatara and Brian Vitori, then taking 11 runs off an over from Chatara, including two boundaries. Two more fours came from Vitori's next over.

The second four off Vitori meant, however, that Junaid had to face the second new ball, which was taken with 26 runs needed. Chatara had Junaid caught at gully with the fourth delivery.

Last batsman Rahat Ali edged a single off the next delivery. Seeking to retain the strike, Misbah pushed the last ball of the over into the covers but sent Rahat back as Hamilton Masakadza swooped to pick up the ball.

Rahat was unable to regain his crease and was run out comfortably, sparking exuberant celebrations by the Zimbabwe players.