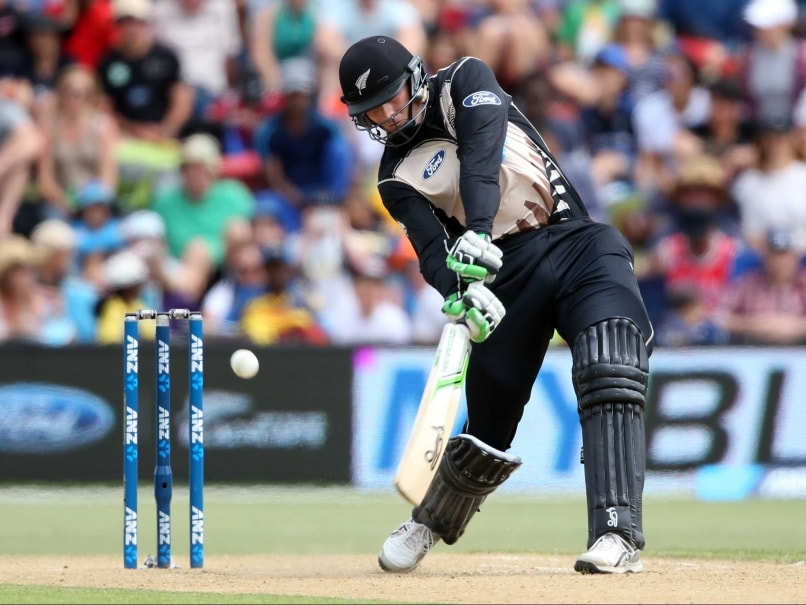 Martin Guptill of New Zealand plays a shot during the first Twenty20 match against Sri Lanka at the Bay Oval in Mount Maunganui.© AFP

In-form batsman Martin Guptill cracked 58 off 34 balls to set up New Zealand for a tense three-run win in the first Twenty20 international against Sri Lanka on Thursday. (Scorecard)

Sri Lanka had three wickets in hand and required 13 off the last over by Grant Elliott at Mount Maunganui but could only manage 10 runs as they lost two wickets.

The result put the pressure on Sri Lanka to win the second and final game in Auckland on Sunday or they will slip from first to third behind the West Indies and Australia in the world rankings.

Sri Lanka lost early wickets and were 86-5 at the halfway stage with top scorer Danushka Gunathilaka back in the pavilion after hitting 46 off 29 deliveries.

Tillakaratne Dilshan went at the start of the second over and captain Dinesh Chandimal was out in the third over as they tried to force the pace against the bowling of Matt Henry and Trent Boult.

Milinda Siriwardana (42) and Thisara Perera (28) started to repair the innings with a stand of 49 in 27 balls for the sixth wicket and Chamara Kapugedera (17) and Nuwan Kulasekara (14) kept up the pressure.

But on the third ball of the final over Kulasekara was well caught in the deep by Boult and Kapugedera was run out on the next delivery.

Guptill and Kane Williamson gave New Zealand a flying start bringing up their century partnership at the start of the 11th over.

But they had no sooner passed 100 when Guptill was first to fall for 58 when he was run out by a side-on throw from Kapugedera on Williamson's call for a quick single.

Williamson followed soon after for 53 off 42 while Colin Munro scored 36 and Ross Taylor was not out 22.

Comments
Topics mentioned in this article
New Zealand Cricket Team Sri Lanka Cricket Team Martin Guptill Grant Elliott Tillakaratne Dilshan Kane Williamson Cricket
Get the latest updates on India vs Australia Series, check out the India vs Australia Schedule for 2020-21 and Ind vs Aus live score . Like us on Facebook or follow us on Twitter for more sports updates. You can also download the NDTV Cricket app for Android or iOS.