"What are you doing?" the fan screamed in anger at his friend after he dropped a sitter in the stands. 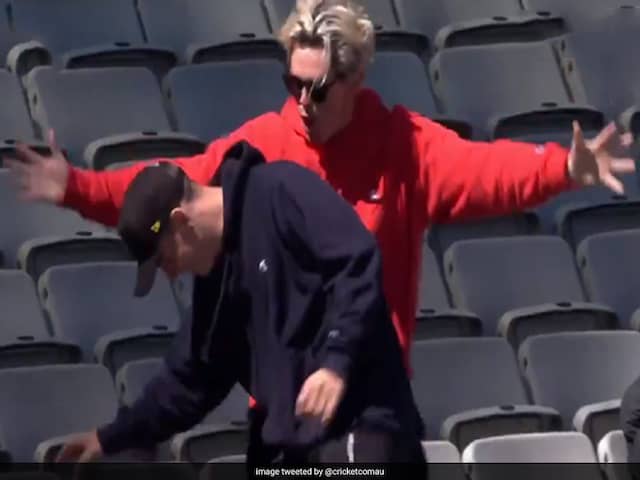 The fan was expressive of his disappointment at his friend's dropped catch.© Twitter

As Aaron Finch smashed Adam Zampa over long-off in the Marsh Cup match between South Australia and Victoria on Tuesday, it was a moment of disappointment and disbelief for one fan in particular as his friend fumbled a sitter in the stands. With Victoria chasing 323, Aaron Finch came down the track to Adam Zampa before lofting a beautiful drive that cleared long-off. The ball headed straight to the fan and his friend. The fan at first has his fists in the air in anticipatory celebration as it looked like his friend had clung on to the ball, but soon he buries his face in his hands in disbelief.

"What are you doing?" he shouts in anger before grabbing his friend and shaking him as he looked for the ball.

And if that was not enough to let his friend know how poor his concentration was, the fan then gestured his friend towards the exit.

Watch the video of the fan's burst of anger at his friend here:

Some brutal feedback from this fan's mate after he dropped Aaron Finch in the crowd #MarshCup pic.twitter.com/yV7AXLgv06

You wouldn't be surprised if the fan spent the next few weeks giving catching practice to his friend.

Finch went on to make the most of the "dropped opportunity", scoring a fine century, but his efforts were in vain as Victoria fell short of their target by just one run. Finch, who scored 119 off 123 deliveries, was also helped by Peter Handscomb, who scored a 75-ball 87. Jake Fraser-McGurk's late flourish almost saw Victoria grab the win, but with three runs needed off the last ball to win the match, Fraser-McGurk could only manage one run off a leg-bye. South Australia had earlier put on 322 on the board, powered by a Callum Ferguson century and half-centuries from Tom Cooper and Alex Carey.

Adam Zampa Cricket
Get the latest Cricket news, check out the India cricket schedule, Cricket live score . Like us on Facebook or follow us on Twitter for more sports updates. You can also download the NDTV Cricket app for Android or iOS.