Mohinder Kaur levelled serious accusations against her son Manpreet, who apart from India has played for the Chennai Super Kings, Deccan Chargers and lately for Kings XI Punjab in the Indian Premier League. 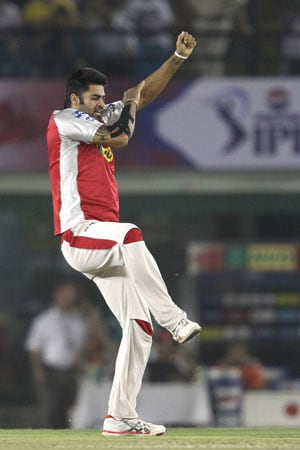 Cricketer Manpreet Singh Gony's mother on Friday accused her son of threatening to kill her over a disputed property at Mohali.

70-year-old Mohinder Kaur levelled serious accusations against her son Manpreet, who has played for India as well, at a press conference here.

"If today something happens to me it will be Gony who will be responsible for it," she said lamenting that her son was the "prime conspirator" behind all ills against her.

She alleged that she had put her case before the police several times but no action had been taken so far.

"Gony is harassing me at the behest of his wife and elder brother and his wife, my husband is also assisting them in their illegal designs," she said.

Kaur, who is living in her house in Mohali, said that even her son at many occasions had threatened her with dire consequences.

She alleged that Gony, his brother Manmohan Singh, his wife Amandeep Kaur and their father Sarwan Singh had also tried to kill her.

"I am a senior citizen and suffering from injustice at the hands of my own relatives," she said in her written complaint to police.

"I have been continuously pressurised to hand over the property shares to Gony," she alleged.

Seeking justice, she urged police to register a case against her relatives whose names have been mentioned in the complaint.

Gony, who has played for the Chennai Super Kings, Deccan Chargers and lately for Kings XI Punjab in the Indian Premier League, is youngest of her three sons. One of his brothers is settled abroad.

Meanwhile, Gony trashed the accusations levelled by his mother as "baseless."

"I got separated from my family six years back. After that I had no connections with them (family members)," Gony said over phone from Himachal Pardesh.

"I had nothing to do with my mother," Gony, who got married allegedly against the wishes of her mother few years back, said.

Meanwhile, police said that it was looking into the complaint and verifying the facts.

Sources close to the family said that there has been long standing dispute among the family members over the property and some land.

Comments
Topics mentioned in this article
Cricket Manpreet Gony
Get the latest updates on ICC Women's Cricket World Cup 2022 and IPL 2022, check out the Schedule , Live Score and IPL Points Table. Like us on Facebook or follow us on Twitter for more sports updates. You can also download the NDTV Cricket app for Android or iOS.