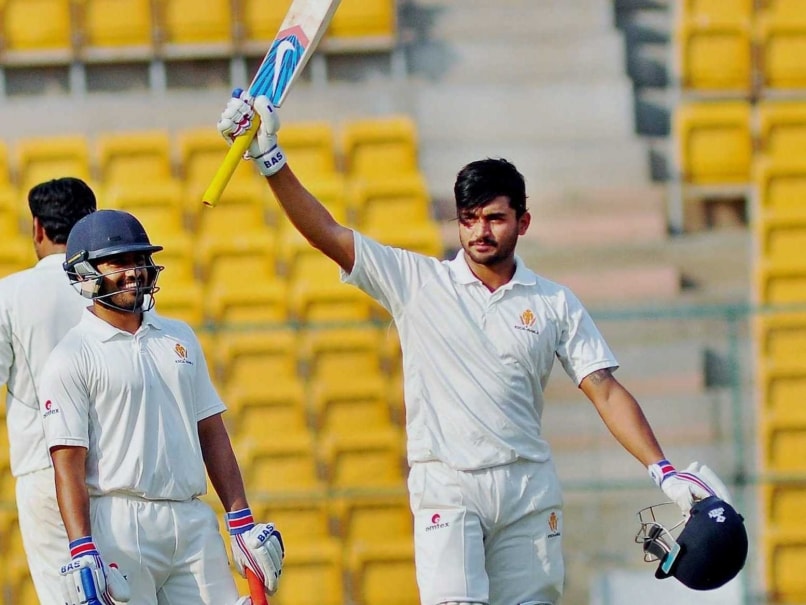 Manish Pandey of Karnataka celebrates his century as teammate Karun Nair looks on during the Ranji Match against Vidharbha at Chinnaswamy Stadium in Bengaluru.© PTI

Manish Pandey (104) led the defending champions with a superb century as Karnataka ended the day one of their Ranji Trophy match against Vidarbha at a decent 298 for six in Bengaluru. (Read more in cricket)

Sent into bat, Karnataka batsmen held the fort for most part of the day but lost three quick wickets in the last session.

Pandey, who hit his 16th first class hundred, stitched a 148-run stand with Karun Nair (58) for the fourth wicket after the hosts were 87 for two with Robin Uthappa and Rahul back into the pavilion.

Soon after celebrating his impressive ton, Pandey fell to left-arm pacer Thakur, who disturbed Pandey's stumps. Pandey struck 13 boundaries and a six on way to a 163-ball 104 runs.

Uthappa, who has had a lean patch so far in this season, got into the groove and was among runs by scoring 59, crackingÂ ten boundaries in 134 balls.

However the day ended in disappointment for KL Rahul (21), who was making a comeback after an injury which he had sustained during the Sri Lanka tour. He got a start but could not convert as he was caught by Ravikumar Thakur off Faiz Fazal.

With Karnataka looking in a commanding position with the score reading 266 for three in the post-tea session, the hosts lost three quick wickets by adding a paltry 32 runs.

From 266/3, the defending champions collapsed to 298/6 with Shreyas Gopal (18) dismissed in the last ball of the day.

The late-day wrecker was Thakur who packed off Pandey and Nair off successive deliveries in different overs - 79th and 81st overs.

Comments
Topics mentioned in this article
Manish Pandey KAR Lokesh Rahul Cricket
Get the latest updates on ICC Women's Cricket World Cup 2022 and IPL 2022, check out the Schedule , Live Score and IPL Points Table. Like us on Facebook or follow us on Twitter for more sports updates. You can also download the NDTV Cricket app for Android or iOS.