Mahendra Singh Dhoni has stated that India will field three pace bowlers and two spinners in the first ODI against Australia in Perth. 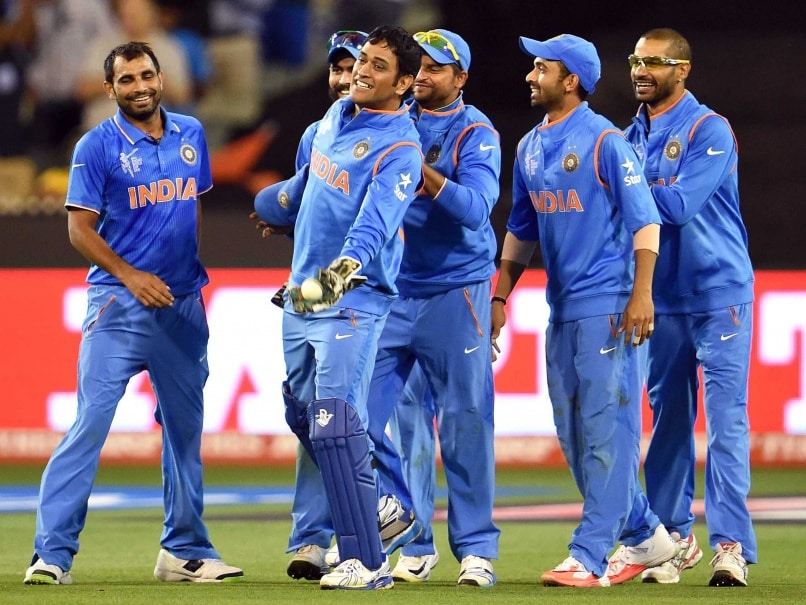 Mahendra Singh Dhoni has said that Mohammed Shami's absence during the series will be a huge blow to the Indian team.© AFP
Perth:

Claiming to be short of a seamer all-rounder, Indian captain Mahendra Singh Dhoni said he has no option but to field three fast bowlers and two spinners in the five-pronged attack for the first ODI cricket match against Australia in Perth. (Can Mahendra Singh Dhoni Salvage Pride Down Under, One Last Time?)

"Most likely it will be a 3-2 combination. We don't really have a seaming all-rounder. Who the players are, we'll have to wait and watch," Dhoni said in the pre-match press conference. (Australia Ready for MS Dhoni's Aggressive India, Says Darren Lehmann)

The skipper's statement automatically rules Himachal Pradesh's Rishi Dhawan out of the equation as he has been picked as an all-rounder in this team.

Dhoni also had a message for team's younger lot about next two and half weeks Down Under.

While he did not take names but the skipper gave ample indication that left-arm seamer Barinder Sran will be making his international debut in the series as the team will miss the services of the dependable Mohammed Shami.

"Shami is someone who can bowl with the new ball, in the middle overs and at the death. It's always good to have that kind of a bowler and it's sad to lose him. As far as the newcomers are concerned, we will definitely feature them in the tournament," Dhoni added.

The other question is the choice between Gurkeerat Singh Mann and Manish Pandey in the slot vacated due to Suresh Raina's exclusion.

The skipper did not drop any hint as to who is his preferred choice but said that it would depend on who fits better at No.6 slot.

"We have to pick one of the two (Gurkeerat and Manish) to bat at No 6 and we have to see which batsman fits that slot. It is a very difficult position to bat. It will depend on what the top four or five batsmen have done, and according to the need of the game, we'll make a call. But ideally, Nos 5 or 6 is a slot where it's good to have individuals, who can adapt and who are not rigid about their batting slots," the skipper added.

Dhoni feels playing at the top level demands a certain degree of flexibility, which is a key ingredient for success in all good teams.

"If you see the success of the Indian team, we had quite a few players who could bat at different numbers and very few who have been successful at Nos 6 or 7. We've had openers in first-class cricket batting at No 3 and those at Nos 4 or 5 ended up being openers.

"That flexibility and adaptability has to be there because you have to make the most of the number of overs according to the demands of the game. I don't think giving a fixed slot really helps anyone. What helps is having a mindset where you take every opportunity as a challenge, and every challenge as an opportunity."

Â Maintaining that "rankings never mattered" to him, Dhoni said his focus will be on performance as always.

"I have been asked this question many times and my answer is not going to change. It is the performance that takes care of the rankings."

The man, who has won many a matches for India in tough situations, feels that it is important for the youngsters to learn playing under pressure.

"I feel how you handle pressure is more important than the talent aspect. That ultimately depends on the individual and his character. The more he plays the better he gets," Dhoni gave his observation.

Since there will be a few rookies, the skipper's advice for them is to rise to the challenge thrown at them.

"We also have a side where we have to feature a few debutants at some point during the series. It will be very important for them to accept it as a challenge, because Australia is a place where you get good competitive cricket. I feel that actually helps you gain experience and it will be a win-win scenario for both the teams while going through this phase," he added.

He admitted that the team does not know much about Aussie newcomers Joel Paris and Scot Boland but was all praise for country's cricketing structure that produces quality players.

"Australian domestic cricket quality is very high, which means the players who come up have already got good exposure playing against people who are playing or have played international cricket. I feel that way Australian cricket is blessed," said Dhoni.

With the Big Bash League on, the Indian skipper was asked of his plans to play in the fast-growing T20 league here in Australia but his answer was a borderline 'No'.

Â "Well, it's very difficult for me to say. It depends on when I retire, and if I'm in a position to play cricket because the quality of cricket in Big Bash is high.

"It depends on the physical fitness and the will to carry on, because if you're part of the Indian cricket team for 10-15 years sometimes you feel you've played too much cricket. So, we'll have to wait and watch," Dhoni signed off.