This and several other nuggets about top Indian cricketers such as Rahul Dravid and VVS Laxman find a mention in a new book - "Think Like a Champion" - written by Rudi Webster, a former West Indian team manager who worked with the Indian team as a psychologist in 2006-07. 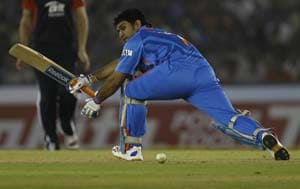 Indian skipper Mahendra Singh Dhoni's mind wanders in several directions while he is batting but he manages to keep the focus by humming songs even when the bowler is running in from the other end.

This and several other nuggets about top Indian cricketers such as Rahul Dravid and VVS Laxman find a mention in a new book -- "Think Like a Champion" (published by Harper Collins) -- written by Rudi Webster, a former West Indian team manager who worked with the Indian team as a psychologist in 2006-07.

According to the author, Dhoni wants to chip in for the Indian Army and set up a Sports Academy in his city Ranchi after retiring from international cricket.

"When I am batting, I focus on the ball. Sometimes my mind wanders off to places where it is not supposed to be but as soon as I notice it bring it back to the ball. Singing helps me to stay focussed," Dhoni is quoted as saying in the book.

Dravid, on the other hand, offers a more serious view on how to stay focussed.

"...it is the ability to play one ball at a time and not go too far ahead of yourself and get caught up in the past. I guess that would be concentration for me."

Laxman's take on the issue is: "many different thoughts pass through my mind when I am batting but as soon as the bowler is about to deliver the ball, my concentration focusses sharply on the ball for that fraction of a second. That is concentration for me."

Commenting on the sport in general, Dhoni feels to learn from mistakes is what makes a good player great.

To a question on leadership and team work, Dhoni asserts he is not a "lone wolf. I am a team man...If you give me the toughest assignment possible and I have people with me, I would definitely give it my best shot."

"The leader must be able to blend and balance the expertise in the team and create a learning atmosphere," says Dhoni, emphasising the importance of simple communication.

On how he makes the transition from the shorter formats cricket to Tests, Dhoni replies, "I have the habit of going hard at deliveries if I play too much Twenty20 cricket and ODI formats. Technically, I am not the most gifted batsman and when it comes to Test cricket, I have to adjust to suit the Test format. So, I practise hard to make those adjustments to be ready for the game."

Dhoni refuses to consider pressure as a negative force, saying that it actually brings out the best in him.

"...I view it as a positive force that lifts me to better performance. Pressure to me is just like added responsibility...It's not pressure when God gives you an opportunity to be a hero for your team and your country," he argues.

Laxman, meanwhile, detailed his early days in the game and what motivated him to take it up.

"When I was young, I wanted to be a doctor. Both of my parents are doctors and my father was my role model. Like any young kid in India, I played cricket but never thought that I would play it as a professional."

Answering the same question, Dravid said, "My motivation to play the game was my love of the game, the love of being outdoors and having fun."

On to the most discussed man in Indian cricket, Sachin Tendulkar, Dravid was asked what it meant to share the dressing room with him.

"For me, Tendulkar is the best of all time. He is the greatest batsman I have ever seen. It's a great privilege to play with him, I've learnt so much from him, particularly the way he conducts himself on the field and the way he plays different types of bowling. We all look up to him. He is our role model."

"I never dreamt of playing with Sachin. Playing with him is like having a God coming into this world and blessing you. I am honoured to share the same dressing room. "

Dhoni described as "amazing", the way Tendulkar conducts himself on and off the field.

"He has been an inspiration and role model to everyone in the Indian team. I have learnt a lot from him, and his advice and opinions are always are highly valued. Not only has he helped the younger players in the team but also the senior ones."

Comments
Topics mentioned in this article
Cricket India Cricket Team Rahul Dravid Yuvraj Singh VVS Laxman MS Dhoni Suresh Raina RV Webster
Get the latest updates on ICC T20 Worldcup 2022 and CWG 2022 check out the Schedule, Live Score and Medals Tally. Like us on Facebook or follow us on Twitter for more sports updates. You can also download the NDTV Cricket app for Android or iOS.