Luke Wright must have felt right at home on Monday. Conditions were akin to an icy, wet, January evening in the UK and the Englishman produced an innings that lit up a dull Hobart sky. In doing so, he broke nearly every Australian domestic Twenty20 batting record. 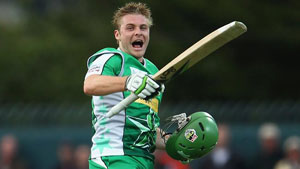 Luke Wright must have felt right at home on Monday. Conditions were akin to an icy, wet, January evening in the UK and the Englishman produced an innings that lit up a dull Hobart sky. In doing so, he broke nearly every Australian domestic Twenty20 batting record to help the Melbourne Stars to a crucial victory over the ladder-leading Hobart Hurricanes. Wright thumped an extraordinary 117 from 60 deliveries with eight fours and nine sixes to leave the 13,713 in attendance breathless, and launch his side up to third position on a very congested Big Bash League table.

Wright and Robert Quiney (62) justified their captain's decision to bat as they combined for the highest partnership in Australian domestic T20s. Along the way Wright set record after record of his own. He reached 50 from 23 balls, the fastest half-century in this BBL. That record was broken by Travis Birt an hour later. But Wright's hundred from 44 balls will be a record that will take some breaking. He brought it up with a big straight six off the usually miserly Xavier Doherty.

The consistency of Wright's hitting was astonishing and he generated great power to knife several balls through the icy, gale-force wind and beyond the rope on nine occasions.

Wright and Quiney were helped significantly by some jittery fielding during their 172-run stand. Hobart dropped four catches between the pair, including each player off consecutive deliveries. Eventually Birt clung on a Quiney missile on the midwicket rope. The Hurricanes dropped a fifth catch, off Matthew Wade this time, in the final over. Ironically, it probably helped rather than hindered their cause, as it meant David Hussey faced only three balls rather than four. Hussey steered two near-perfect yorkers from Ben Laughlin to the backward point rope to lift the total beyond 200.

It looked a target beyond the Hurricanes' reach when Phil Jaques miscued to mid-on second ball of the innings. Enter Birt. In the fourth over from Jackson Bird he launched a six down the ground and then flat batted another one over the point rope.

The next over from Clint McKay was carnage. After copping the first ball on the thigh, Birt swatted the next two to opposing square boundaries for four. That was the entree. For the main course he swept the fourth ball, a low full toss, over fine leg and out of the ground. The fifth and sixth were no-balls, and they both were dispatched miles over the midwicket fence to take Birt to 51 from 22 balls. Birt would not add to it though as he dragged the next ball onto his stumps. McKay's over cost 28 runs, featured three dot balls, and claimed the crucial wicket of Birt.

Owais Shah immediately picked up the slack, continuing his outstanding form in the tournament. He danced around the wicket with typical style and flourish. His 55 from 37 kept Hobart in the hunt but when he fell to James Faulkner the chase was over. The Tasmanian left-armer claimed four important wickets for the Melbourne side although they came at a cost of 46.

Yet again the masterful craft of Shane Warne and the clever guile of Hussey were features of the Stars' bowling effort. Warne claimed 2 for 23, and Hussey 2 for 28 to effectively strangle the chase, after the Hurricanes spinners had gone for more than 13 an over as a pair.