Luke Ronchi's 107-run knock was the highlight of the New Zealand second innings which ended at 235 all out on the third and final day, providing the visiting side more batting practice ahead of the first Test 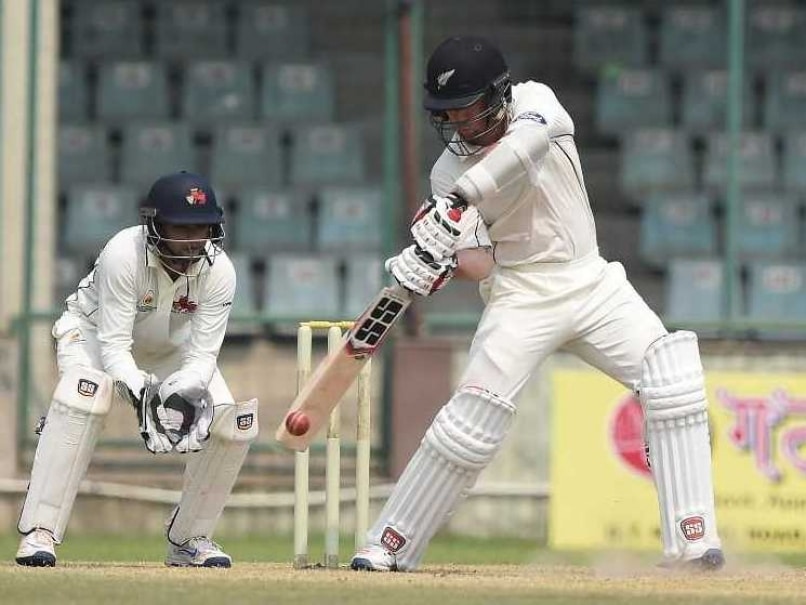 Luke Ronchi plays a shot during the warm-up match against Mumbai in New Delhi.© AFP

Back-up opener Luke Ronchi made his case for selection in the first Test with a cracking century as New Zealand's only warm-up match of the India tour ended in a draw against Mumbai at the Feroze Shah Kotla in New Delhi on Sunday.

Ronchi's racy 107-run knock was the highlight of the New Zealand second innings which ended at 235 all out in 66.4 overs on the third and final day, providing the visiting side more batting practice ahead of the first Test beginning in Kanpur on September 22.

Mumbai, starting the day at 431 for five, batted for 11 overs before declaring at 464 for eight to end up with a 140-run first innings lead. Siddhesh Lad, who was overnight on 86, went on to complete his hundred off 99 balls and remained unbeaten.

For New Zealand, their second innings was all about giving time in the middle to batsmen who struggled or who did not get a hit at all in the first innings.

Therefore, the out-of-form Martin Guptill came out to bat with a different opening partner in Luke Ronchi and not Tom Latham, who top-scored with a solid 55 in the first innings.

Ronchi, on the other hand, did not get to bat on the opening day, thus giving him an opportunity to stake a claim for the opening spot. And eventually he did that with a commanding performance.

The day three pitch did have some usual wear and tear but not enough to trouble the batting side consistently. Mumbai, opening the bowling with a pace-spin combine, struck in the second over with Guptill lasting only two balls.

The batsman, who is expected to keep his place for the first Test despite a lean run, was caught at first slip after left-arm spinner Vishal Dabholkar induced an edge.

With Kane Williamson, Ross Taylor and Latham among the runs in the first innings, left-arm spinner Mitchell Santer came out to bat at number three but he soon departed after being stumped off Lad's bowling, leaving the visitors at 62 for 2 lunch in 15 overs.

One of the few times the pitch raised alarm bells was when southpaw Henry Nicholls was caught behind off left-arm-spinner Gohil, on a ball that rose sharply and the wicket-keeper collected it well above the waist height.

All this while, Ronchi displayed top form as he dished out some delightful cover drives besides using the long handle effectively.

He was literally dealing in boundaries as he hammered 12 fours on way to completing 50 runs off 57 balls. He clobbered three sixes and as many fours in the second half of his innings.

As he punished the bowlers, wickets kept falling at the other end and by the time he was stumped after scoring a sublime hundred, New Zealand were left at a precarious 162 for six, just 22 ahead of Mumbai with more than a session remaining in the day.

However, B J Watling (43) and Latham (25) calmed nerves in the dressing room after resuming from the tea break at 187 for six in 49 overs. They shared a 55-run stand to guide the team to safety. The game ended before the stipulated time when Ish Sodhi mishit to be caught at mid-on.

Comments
Topics mentioned in this article
Cricket New Zealand Cricket Team MUM Luke Ronchi India Cricket Team
Get the latest updates on India vs Australia Series, check out the India vs Australia Schedule for 2020-21 and Ind vs Aus live score . Like us on Facebook or follow us on Twitter for more sports updates. You can also download the NDTV Cricket app for Android or iOS.